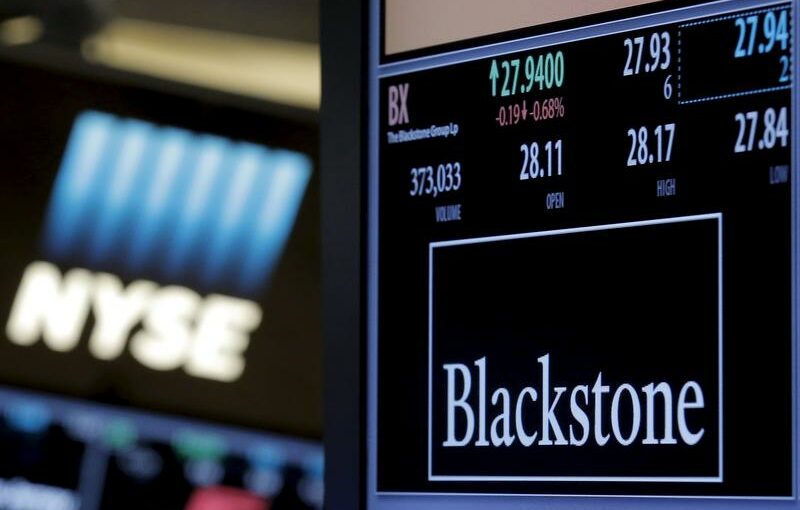 FILE PHOTO: The ticker and trading information for Blackstone Group is displayed at the post where it is traded on the floor of the New York Stock Exchange (NYSE) April 4, 2016. REUTERS/Brendan McDermid

Blackstone and Cascade, which already owns a 19% stake in London-based Signature, are in advanced talks with the company about their proposal that involves a cash offer of 3.81 pounds per share, they said in a joint statement.

The company said last month it was minded to recommend the Blackstone proposal.

Shares in the company formerly known as BBA Aviation fell 4.2% to 4 pounds on the FTSE 250 midcap index by 1020 GMT, handing back some of their 65% gain in the three weeks since Signature Aviation confirmed talks with Blackstone.

The offer which was disclosed in December will be made through Brown Bidco Ltd, a newly incorporated company which will be 70% owned by Blackstone with Cascade holding the rest.

Signature Aviation said in December that this was Blackstone’s sixth proposal, its first being in February last year.

While airlines across the world are struggling to survive the COVID-19 travel curbs, operators of private jets have fared better as wealthy passengers switch to what is perceived as a safer way to fly.

In its half-year results statement last year, Signature Aviation pointed to a recovery in flight activity in August compared to April when most countries had just begun lockdowns to stymie the spread of the virus.

Signature also disclosed in December it had rebuffed another proposal from Global Infrastructure Partners about a bid that was lower than Blackstone’s.

Blackstone said the terms of its agreement with Cascade also contained meant Cascade will vote against any competing proposal after a firm bid is made Blackstone.

As per UK takeover rules, Blackstone and Cascade are required to either announce a firm intention to make an offer or walk away by Jan. 14.