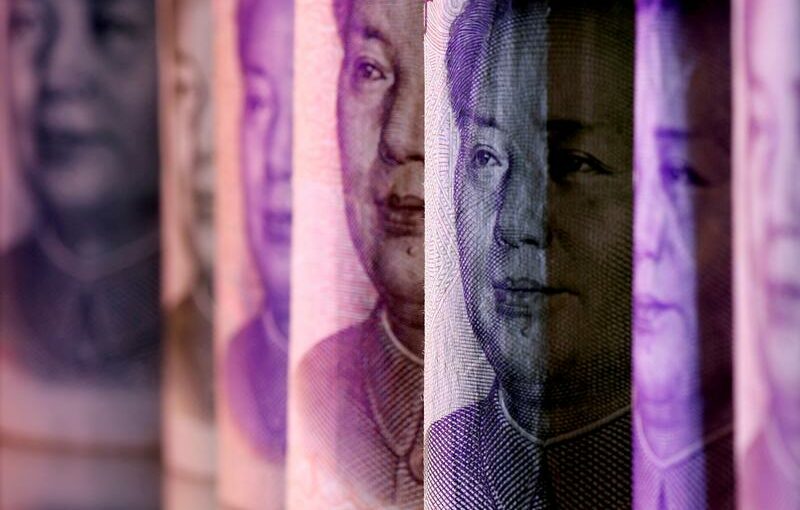 BEIJING (Reuters) – China is likely to lean on incremental steps to slow the yuan’s gains to deter speculators and help its exporters, shunning drastic measures that could undermine its goal to liberalise the currency and boost the yuan’s global clout, policy sources said.

The yuan has gained almost 12% against the dollar since May 2020 as China leads other economies in its recovery from COVID-19 and the greenback weakens, though it has been driven more recently by foreign fund inflows into yuan-denominated bonds and stocks.

But it slipped more than 0.5% this week as Beijing has mounted a coordinated effort to talk down expectations of further gains. A flurry of official statements have warned against speculating on the currency and regulators have taken steps to stem its rise.[CNY/]

The People’s Bank of China (PBOC) has ample tools to cool one-way currency bets and fend off hot money inflows amid worries over asset bubbles, but will tread cautiously to avoid spooking investors, said the policy sources, who advise the government.

The PBOC, under reform-minded governor Yi Gang, has been trying to give market forces a greater role in steering the yuan, part of longer-term reforms to make it a more international currency, they said.

“The yuan’s appreciation will test the PBOC’s market-based approach, but policy tools at the PBOC’s hands will be enough to cope with it,” said one of the people, who declined to be identified due to the sensitivity of the matter.

In a statement responding to questions from Reuters, the PBOC said it will not “use the exchange rate as a tool”, and reiterated its managed floating currency regime based on market supply and demand and with reference to a basket of currencies.

Policymakers fear rapid yuan gains could lure more speculative money into everything from property, to stocks and commodities, fuelling asset bubbles, with any sudden reversal of the inflows potentially harming the economy.

They also worry about the impact on Chinese exports, which remain strong for now but could lose steam in the second half of the year as factories in other countries recover from the pandemic.

“Eventually, this could lead to domestic inflation and asset bubbles and affect domestic monetary policy. Too much appreciation will be unfavorable for financial stability and unfavourable for exports.”

The yuan is hovering near a three-year high against the dollar, and has recouped pretty much all its losses since the start of the Sino-U.S. trade war in early 2018. It is also near its strongest level versus a basket of trading partners since 2016.

Bullish bets on the yuan have hit a near six-month high, a Reuters poll showed this week, despite the spate of warnings from Chinese authorities.

The PBOC said in the statement that it has been fully communicating with the public on the currency issue and cautioned against any speculation.

The PBOC is poised to take a measured approach, tightening conditions for some inflows, adjusting currency market liquidity and using its so-called window guidance to direct banks, the policy sources said.

The PBOC bank has repeatedly said it has “exited” from regular yuan intervention, but it continues to set a daily guidance midpoint and Chinese state banks were seen buying dollars last week.

Some policy insiders expect the yuan to rise further to 6.3 per dollar this year, from around 6.4 now, but caution that its outlook remains unclear as an expected policy shift by the U.S. Federal Reserve could spark capital outflows from China.

“The yuan could rise some more in the near term, but it could start to depreciate if the United States exits from its stimulus,” said one of the sources.

While China’s economy has rebounded to pre-pandemic levels, expanding a record 18.3% in the first quarter, its recovery remains uneven. Rising raw material costs are weighing on production and stirring worries about inflation.

The government has taken steps to slow soaring commodity prices but with limited success, fuelling speculation it may have to use a firmer yuan to offset imported price rises.

But central bank officials have recently stressed that the yuan would be not used as a tool to spur exports via depreciation or offset the impact of surging global commodity prices via appreciation.