Home » Markets » China to cut energy intensity by around 3% in 2021: work report 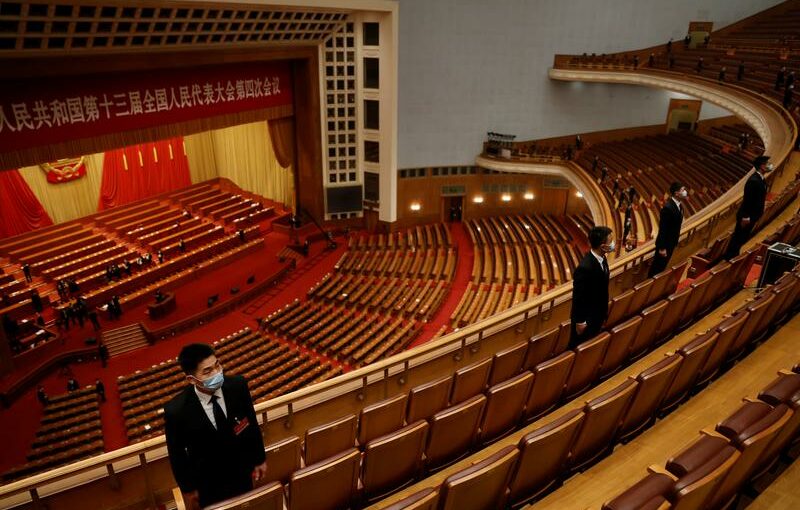 SHANGHAI (Reuters) – China will cut energy intensity, a ratio that measures how much is used in driving economic growth, by around 3% in 2021 as it bids to meet long-term climate goals, Premier Li Keqiang said in his government work report, delivered to parliament on Friday.

Security personnel keep watch at the end of the opening session of the National People’s Congress (NPC) at the Great Hall of the People in Beijing, China March 5, 2021. REUTERS/Carlos Garcia Rawlins

China, the world’s biggest source of climate-warming greenhouse gas, is aiming to bring carbon emissions to a peak before 2030 and become “carbon-neutral” by 2060.

Li pledged that an “action plan” would be drawn up this year to meet the 2030 target, and he also promised to improve the country’s overall energy mix to ease the country’s dependence on fossil fuels.

Over the 2021-2025 period, China will also aim to cut energy intensity by 13.5% and carbon intensity – a ratio measuring how much carbon is emitted in growing the economy – by 18%.

But Li Shuo, senior advisor for Greenpeace in Beijing, warned that China had to do more if it is to keep up its previous pace of decarbonisation as its economy rebounds from the impact of the coronavirus pandemic.

“To tackle the climate crisis, China needs to bring its emission growth to a much slower level, and to flatten the emission curve early in the upcoming five-year period,” he said.

While the report promised to “make a push” for the development of new energy sources, including nuclear, China will continue to promote “the clean and efficient use of coal”.

“There’s still no end in sight for China’s coal plant construction boom,” Greenpeace’s Li said. “Runaway momentum in the steel, cement, and aluminum sectors suggests China needs to do much better to green its COVID recovery.”

The government work report also said China would accelerate the use of new trading mechanisms aimed at cutting carbon emissions and reducing energy use, and it also promised new policies to channel more financial support to green and low-carbon development.

More corporate income tax credits would be made available to support environmental protection and conservation, it said.