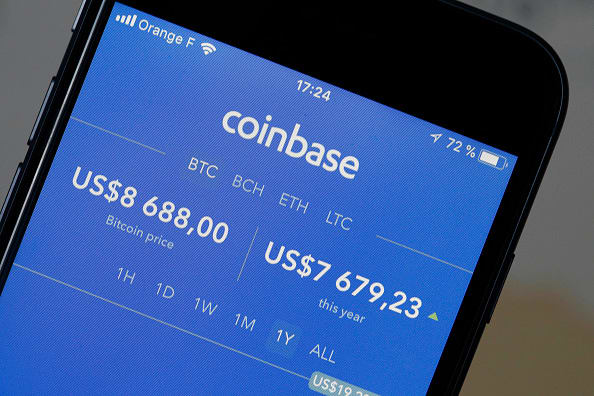 Outraged Coinbase users have launched an online campaign demanding the cryptocurrency exchange refund their losses after a technical problem led the company to freeze accounts for weeks, potentially locking in large losses for many customers.

Coinbase told customers a glitch in trading of two cryptocurrencies in mid-November was due to "technical reasons." Now many of those customers are blasting the exchange for locking them out of their accounts and, they say, improperly taking their funds.

The issue occurred in mid-November when Coinbase customers were able to buy GYEN, a stablecoin that is pegged to the value of one Japanese yen. Also involved in the mishap was POWR, a cryptocurrency designed to be used in energy trading.

The dispute highlights the risks to millions of individual investors plunging into lightly regulated new cryptocurrency markets, where rules of the road and relationships between exchanges and customers are still being worked out. And it shows that stablecoins – which are marketed as being pegged to outside assets to avoid the huge price volatility in other crypto currencies – are not always as stable as their name implies.

GYEN was listed on Coinbase for the first time on Nov. 10, according to the crypto analysis firm Chainalysis.

Beginning around Nov. 17, the coin somehow became untethered to the yen price it was supposed to be targeting. Chainalysis says it leapt to a high of 0.065643, which is about 7.5 times higher than the fiat equivalent investors thought they were getting.

It is unclear how many customers were involved, how many suffered losses, or how many were able to capitalize on the sudden spike in price and sell before the price crashed again. The coin is now trading at the intended yen peg level.

The company said in an email to some customers obtained by CNBC that "between 15th – 19th November 2021, GYEN on Coinbase experienced unexpected behavior due to unusual market conditions. On 19th November, this was further complicated and for technical reasons, Coinbase disabled trading for GYEN."

"For customers trading with GYEN up until 19 November, this may have resulted in decimal display issues for transactions (displaying 100x greater than or less than what was actually purchased or traded based on the exchange rate confirmed at the time), while the wallet balance accurately reflected the amount traded," the email said.

Coinbase told one customer in an email that as a result, "all buys, sells, trades, sends, and receives of GYEN and POWR have been temporarily disabled on Coinbase.com and Coinbase Pro while we work to correct this. We apologize for this – we know this is a significant inconvenience and we're working as quickly as possible to correct this to ensure that customers impacted can access funds as soon as possible."

Asked what actually happened and how complaints would be addressed, a company spokesperson told CNBC: "In the coming weeks, Coinbase will publish a blog post about the November 19 event involving GYEN and POWR assets. Both GYEN and POWR have resumed trading on Coinbase Pro and withdrawals are enabled on Coinbase.com. Our team continues to work around the clock to restore full trading on the Coinbase retail app and to respond to customer inquiries about this issue. Coinbase has no further comment at this time."

Despite that statement, several Coinbase customers reached by CNBC on Tuesday evening said their holdings on the exchange were still frozen.

Chris Fleming, who owns a construction and maintenance company in Ohio, said he bought $1,763 worth of GYEN the night of Nov. 18. But on Nov. 20, when he checked his account, he said he was shocked.

"The coin skyrocketed, somehow it went up to $151,309 in my account. As anyone would say, holy s—. I thought I need to get his out of here immediately because at any point it could drop back to nothing," he said.

Fleming said he still hasn't gotten access to his funds and started an online petition, which has now attracted more than 1,100 signatures from around the world.

"They held my money ransom for two weeks. I could have invested in other coins and had potential gains," Fleming said. "They need to give some solid, concrete answers, and they need to refund every single person who invested in this and lost money."

Ricky Peacock, a Florida-based mortgage lender, is equally outraged. He said he was also locked out of his Coinbase account after buying GYEN at various price points and suffered a total net loss of $132,000. In his case, he said his account did not show an inflated value.

"My loss was solely caused by Coinbase locking all the users out while they fixed their 100 times glitch," he said. "In doing so, Coinbase saved themselves and threw customers like myself under the bus."

Ryan Huett, an Oregon winemaker, is administering a Facebook group of more than 1,700 disgruntled Coinbase customers who are looking for answers.

Huett said he bought about $75,000 worth of GYEN on Nov. 18 and 19, but at one point his balance showed 100 times more than he purchased. A screenshot of his account shows a current GYEN balance of about $67,000, which he said he can't trade or transfer.

"Coinbase should refund people the actual dollar amounts they invested at anything above the stable coin price," he said.

He said customers who made a killing and were able to transfer their crypto off the Coinbase platform before accounts were frozen don't deserve to keep the money even though it was the company's fault.

Philip Kleinman, a New York City public school teacher, echoed what other customers told CNBC: Once the company froze their accounts, they can't access funds or get help from customer service.

A Coinbase customer since around 2016, Kleinman said he tried to call the support line, but waited nearly three hours before giving up. He said he needs access to the nearly $4,800 he invested in GYEN.

"This is affecting thousands of users, and we all feel left in the dark," Kleinman said.

Lucas Bauer, an Army captain and physician's assistant, said his investment was small – only about $400 – but what happened infuriated him.

"Basically, Coinbase took a stablecoin, but they did not make it a stablecoin during the investment process," he said. "When everyone [got] this one digital asset, the price went up, which it wasn't supposed to. They took everyone's money, and let its prices increase, and they are taking the apex of that price increase and assume everyone bought it at that end, and strip everyone of their money."

He compared it to ordering a pizza.

"So, four weeks later, when they try to fix the receipts, instead of the two pizzas you ordered for $19.88, you get four slices of one pizza – because they are keeping the rest."

— CNBC's Jennifer Schlesinger and Angelica Serrano-Roman contributed to this report.