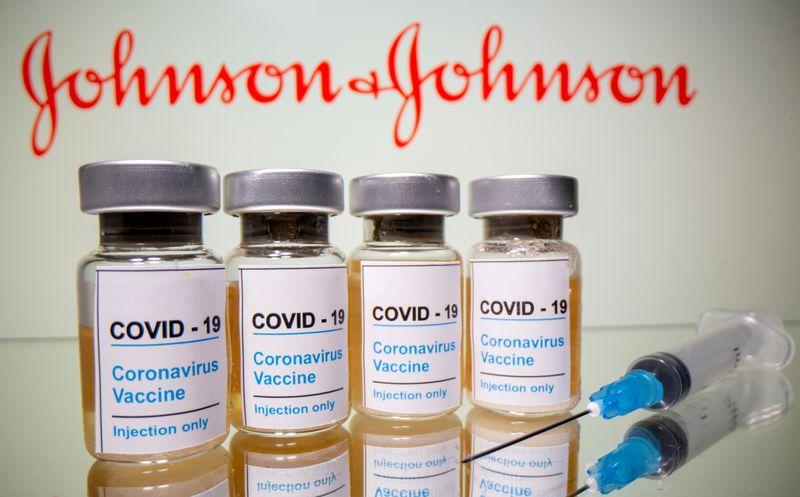 FILE PHOTO: Vials with a sticker reading, “COVID-19 / Coronavirus vaccine / Injection only” and a medical syringe are seen in front of a displayed Johnson & Johnson logo in this illustration taken October 31, 2020. REUTERS/Dado Ruvic/File Photo

LONDON (Reuters) -The European Union’s drug regulator said on Wednesday it is reviewing the death of a woman in Belgium who suffered a blood clot and low platelets after receiving Johnson & Johnson’s COVID-19 vaccine, the first report of a fatality following the vaccine.

The European Medicines Agency (EMA) said it has asked the U.S. drugmaker to carry out a series of additional studies to help assess a possible link between the shot and a rare clotting condition known as thrombosis with thrombocytopenia syndrome (TTS).

It said it is reviewing the case in Belgium with other reports of blood clots with the Belgian and Slovenian medicines agencies.

Earlier on Wednesday, Belgium suspended use of J&J’s Janssen COVID-19 vaccine on people under the age of 41 following the death of a woman who was admitted to hospital with severe thrombosis and platelet deficiency.

She was reported to be Slovenian, although Reuters was not able to confirm this.

As of May 20, more than 1.34 million doses of J&J’s Janssen shot had been administered in the EU, EMA said.

EMA and national authorities will continue to monitor the vaccine’s safety and effectiveness and provide further updates as necessary, it said.