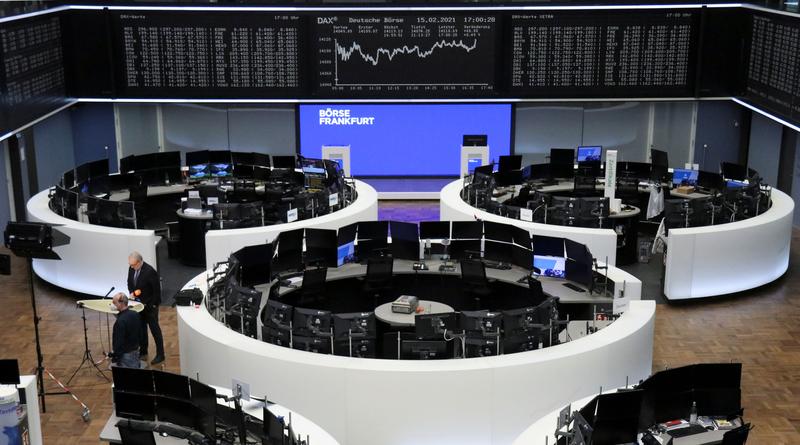 (Reuters) – European shares ended flat around a one-year peak on Tuesday as a boost from major mining and bank stocks was tempered by losses in most other sectors, with investors remaining uncertain over a euro zone economic recovery.

The pan-European STOXX 600 ended largely unchanged after jumping 1.3% in the previous session to its highest level since February 2020.

A 2% rise in shares of Glencore helped the European mining index climb to a near 10-year high, while higher iron ore and base metal prices supported the sector.

Bank stocks rose to a more-than 11-month high as investors bought into some sectors that have been severely hit by the pandemic. But they still remained well below pre-COVID-19 levels.

Data showed euro zone economic output contracted by less than expected in the fourth quarter of 2020.

Other readings showed German investor morale was high over consumption picking up in the coming months, even as inflation expectations in the euro zone’s largest economy were seen cooling.

The STOXX 600 has struggled to reach pre-pandemic levels, lagging its peers across the Atlantic as a new round of lockdowns and disruptions to a vaccination drive hurt sentiment.

“The weakness in economic activity will continue to weigh on output in the current quarter as restrictions curtail mobility and businesses postpone reopening,” analysts at TS Lombard wrote in a note.

“Growth will bounce back strongly in H2 on the back of pent-up demand and an easing of restrictions, although the vigour in economic activity could be less than before.”

Analysts hiked their first-quarter profit growth forecast for European listed companies to 42.7% from the 41% that was expected last week, according to Refinitiv data, on growing expectations of an economic recovery this year.

But fourth-quarter earnings are now expected to have fallen 19.9% versus the 18.2% drop seen last week.

Global equities have remained in demand as U.S. President Joe Biden negotiates a $1.9 trillion stimulus package. In the euro zone, finance ministers agreed on Monday that supportive measures for the economy should stay in place as long as needed.