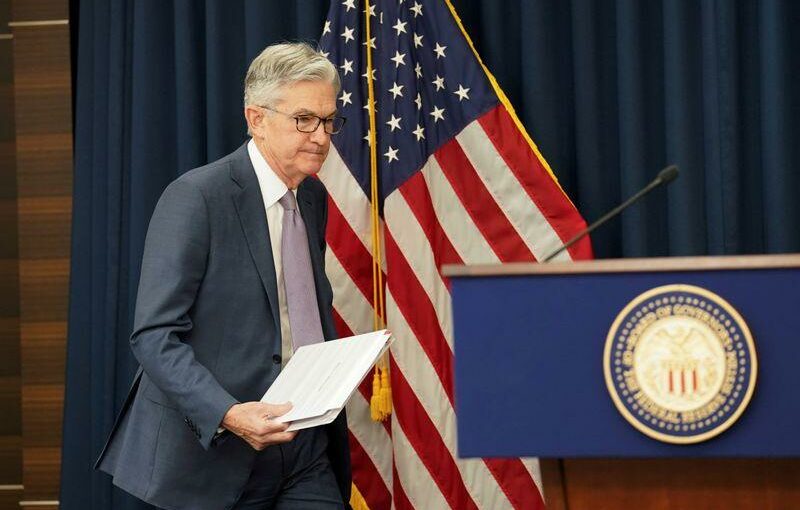 WASHINGTON (Reuters) – U.S. Federal Reserve Chair Jerome Powell, who has promised to keep credit loose and flowing until Americans are back to work, appears in a public forum Thursday at a moment when global investors are openly doubting if he can stick to that pledge once the pandemic passes and the economy surges on its own.

FILE PHOTO: U.S. Federal Reserve Chairman Jerome Powell arrives to speak to reporters after the Federal Reserve cut interest rates in an emergency move designed to shield the world’s largest economy from the impact of the coronavirus, during a news conference in Washington, U.S., March 3, 2020. REUTERS/Kevin Lamarque/File Photo

Powell’s message at a 12:05 EST (1705 GMT) Wall Street Journal forum will likely remain the same he delivered a week ago in back-to-back appearances on Capitol Hill, and that other Fed policymakers have underscored since: Don’t bet against us.

The remarks are likely Powell’s last public comments before a March 17 press conference following the Fed’s next policy meeting.

“We’re 10 million jobs below where we were in February of 2020. 10 million payroll jobs. So there’s a long way to go,” Powell told the Senate Banking Committee on Feb. 23 when asked what his message was for investors who had begun pushing up long-term interest rates in a seeming bet the Fed would impose its own tighter borrowing conditions sooner than expected.

“Monetary policy is accommodative, and it needs to continue to be accommodative … right now, we’ve had three months (averaging) 29,000 jobs a month. It’s not very much progress.”

Some version of that statement has been made by half a dozen Fed policymakers since then in the face of a surge in government bond yields that has seen the 10-year U.S. Treasury note yield climb by more than half a percentage point since the start of the year. It now stands at roughly 1.5%, triple what it was last August and roughly where it was before the coronavirus pandemic struck.

The Fed chorus is all in an effort to explain away that move as showing confidence in the country’s economic recovery, not evidence of damaging expectations about inflation to come or a full-on bet that the Fed would try to raise rates on its own to keep the economy from overheating.

Instead, policymakers have pledged to keep their short-term policy interest rate near zero for perhaps years to come. They’ve also promised to hold down long-term borrowing costs, key to consumer and business decisions to buy autos and homes or invest in new buildings, by buying $120 billion per month in government securities.

If anything, analysts feel Powell might nod to the Fed’s ability to more aggressively intervene and increase its bondbuying if long-term yields keep rising.

It is a potential moment of inflection. Fifty-million people have been at least partially vaccinated against the coronavirus, the rollout is accelerating, and economic growth is expected to follow. Families are sitting on perhaps $1.5 trillion in extra savings they may be eager to spend once it is safe.

In even the very recent past, that set of circumstances might have led policymakers to conclude inflation was sure to follow, and move to stay ahead of it by reducing the formidable amount of support currently provided to households and firms.

But the Fed now sees inflation as a minimal risk, and has put more weight in its policymaking on achieving – and maintaining – maximum employment, the second of the two goals set for it by Congress.

When it comes time to shift gears, Powell told U.S. senators, “expect us to move carefully and patiently and with a lot of advanced warning.”