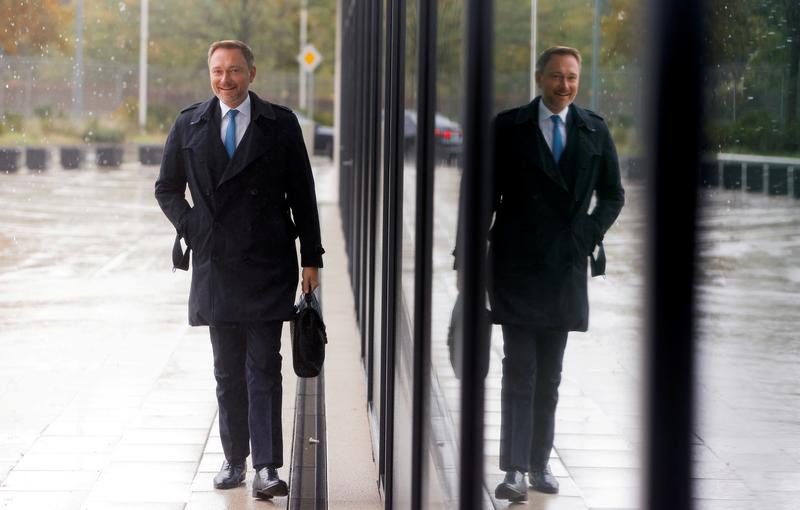 BERLIN (Reuters) – Germany’s three-way coalition talks are heating up as the two smaller parties, the pro-spending Greens and the more fiscally conservative Free Democrats (FDP), are both wrangling over who should take the powerful finance minister job.

With the European Union discussing whether the fight against climate change requires reform of the bloc’s joint fiscal rules – suspended until 2023 due to the pandemic – much is at stake in the duel being fought in secretive negotiations in Berlin.

While FDP leader Christian Lindner, 42, has made no secret of his wish to become finance minister, Greens co-leader Robert Habeck, 52, has so far avoided making public demands – though he is equally determined to get the top position, party sources said.

Olaf Scholz, the outgoing finance minister who led his centre-left Social Democrats (SPD) to a surprise election victory in September, wants Habeck and Lindner to find a compromise, according to a person familiar with his thinking.

When speaking in private, Scholz, 63, says “the boys” have been sparring for too long and an agreement must be found soon, according to the source.

Scholz himself has shown that it makes a difference who is heading the finance ministry: During the pandemic, he convinced Chancellor Angela Merkel to ditch the goal of balanced budget and fiscal discipline for which his conservative predecessor Wolfgang Schaeuble was known.

In an interview with Deutschlandfunk radio on Wednesday, Habeck called for a “flexible interpretation” of the fiscal rules of the European Union’s Stability and Growth Pact to guarantee that all member states can increase public investments needed for a faster shift towards a carbon neutral economy.

This contrasts sharply with the views of Lindner, who has called for a return to solid public finances and a reduction of debt levels across the euro zone following the COVID-19 crisis.

The tussle is not going unnoticed in other European capitals, where the coalition negotiations and horse-trading over ministerial posts are being closely followed.

SPD members and Scholz aides are pointing to the fact that any finance minister will always be constrained by the jointly agreed principles and policy goals of the coalition agreement and the chancellor’s overall authority to establish guidelines.

In their draft agreement following exploratory talks last month, the parties agreed on a relatively open wording on Europe’s fiscal rules that leaves some room for interpretation.

“The Stability and Growth Pact has shown its flexibility. On its basis, we want to ensure growth, maintain debt sustainability and provide for sustainable, climate-friendly investments,” the three parties said.

Coalition tradition normally means the second-largest party – in this case the Greens – has the first right to pick a ministry. So Habeck could simply take the finance ministry and Scholz has signalled he would not intervene, according to another person familiar with his thinking.

In that case, however, Lindner and the FDP might grab the climate and environment ministry that is also key for the Greens to deliver on their election promises, four people familiar with the negotiations said.

“The Greens are in a dilemma,” a senior negotiator said on condition of anonymity.

To solve the problem, coalition officials are playing through three scenarios, with a decision expected in the coming weeks.

In the first, Linder gets his wish and Habeck accepts the climate ministry.

In the second, Habeck gets the finance ministry and Lindner is soothed with a beefed-up economy or interior ministry that will also oversee the promised shift towards a more digital economy and modern state bureaucracy – a key pledge of the FDP.

If agreement cannot be reached on either of those options, the only solution could be that neither the Greens nor the FDP can get their way. In this case, the SPD could end up keeping the finance ministry – in addition to the chancellery.