A cargo ship larger than the Empire State Building has lodged itself sideways in Egypt’s Suez Canal, potentially blocking billions of dollars of shipments from moving through.

“We have a problem, logistically, about getting those planes, trains, trucks and ships in the right spots to meet up with the demand that we have right now,” he said. “That’s the disconnect and that’s going to take between six and 12 months.”

“And then you have Mr. Magoo captaining that ship through the Suez Canal, that’s going to throw another wrench into things and so that’s going to take some time to,” he went on. “This is just going to add misery to pain.”

SUEZ CANAL COULD BE BLOCKED FOR WEEKS, WITH $10B IN SHIPPING TRAFFIC PER DAY DISRUPTED: REPORTS

But Shellady said he isn’t worried for the long-term since he expects supply and demand to return to pre-pandemic logistics in the near future. 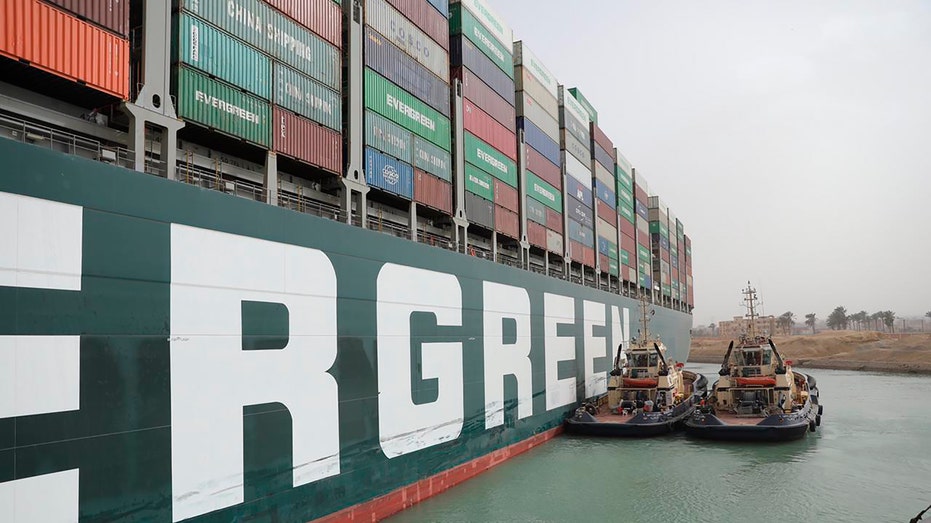 This photo released by the Suez Canal Authority on Thursday, March 25, 2021, shows two tugboats next to the Ever Given, a Panama-flagged cargo ship, after it become wedged across the Suez Canal and blocking traffic in the vital waterway from another

Former investment banker Carol Roth also chimed in and said, in her opinion, rolling out the coronavirus vaccine in Europe has the largest impact on energy pricing as of current.

“How quickly can they get things on track, global travel, getting things back to normal,” she said. “I think this is, sort of, that blip on the radar and isn’t as important as what’s happening… with COVID.”

According to reports, the Suez Canal could be blocked by the Ever Given for weeks, causing nearly $10 billion in shipping disruptions every day. Shipping news website Lloyd's List confirms westbound and eastbound traffic on the canal carries through about $9.6 billion of goods daily.

The site also reported that more than 50 vessels travel through the 300-foot-wide, man-made waterway every day, transporting 1.9 million barrels of oil daily and 1.2 billion pounds of cargo annually.