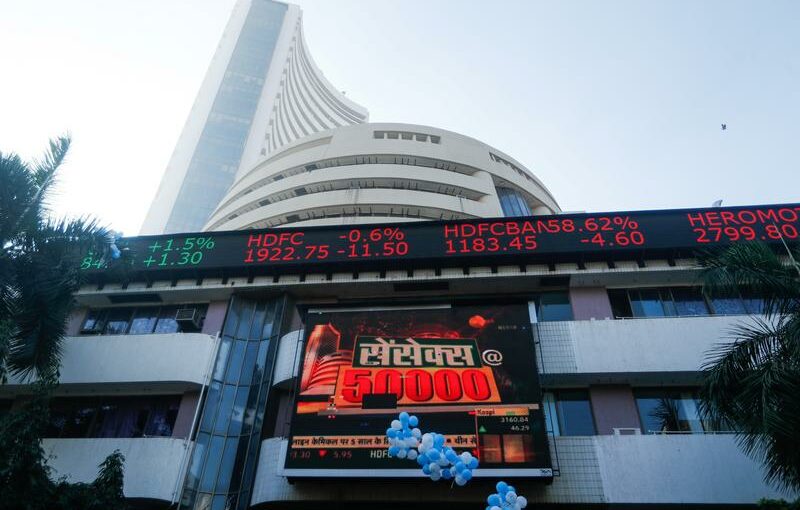 A general view of the Bombay Stock Exchange (BSE), after Sensex surpassed the 50,000 level for the first time, in Mumbai, India, January 21, 2021. REUTERS/Francis Mascarenhas

BENGALURU (Reuters) – Indian shares closed higher in a volatile session on Tuesday as metals and tech stocks rebounded from a sharp slide over the last three sessions, while investors also focused on a U.S. Federal Reserve meeting due to end on Wednesday.

The indexes fell as much as 0.4% earlier in the session, dragged by auto stocks. The Nifty’s volatility index slipped 5.6% after having risen for four straight sessions.

Metal stocks led the charge, jumping 2.6% from troughs hit in the previous session on concerns of the impact of a default by Chinese property giant China Evergrande.

“I think there is a realisation that the Evergrande issue will likely not hurt Indian companies as much as it will the global players… the September quarter is also expected to be better for metal companies.”

Investors are also awaiting cues on U.S. monetary policy from a Federal Reserve meeting starting later on Tuesday. The central bank is likely to lay the groundwork for an eventual tapering of its bond-buying programme.

Real estate stocks snapped two consecutive sessions of losses, with Brigade Enterprises adding more than 9%, as analysts pointed to signs of a rebound in sales for home builders following the easing of COVID-19 restrictions.