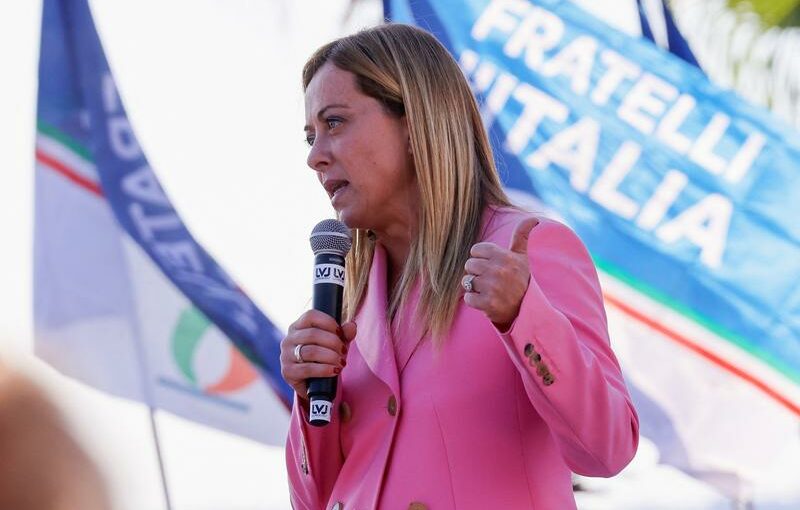 ROME (Reuters) -A right-wing alliance led by Giorgia Meloni’s Brothers of Italy party looks set to win a clear majority in the next parliament, exit polls said on Sunday after voting ended in an Italian national election.

An exit poll for state broadcaster RAI said the bloc of conservative parties, that also includes Matteo Salvini’s League and Silvio Berlusconi’s Forza Italia party, won between 41 and 45%, enough to guarantee control of both houses of parliament.

Italy’s electoral law favours groups that manage to create pre-ballot pacts, giving them an outsized number of seats by comparison with their vote tally.

If confirmed, the result would cap a remarkable rise for Meloni, whose party won only 4% of the vote in the last national election in 2018, but this time around was forecast to emerge as Italy’s largest group on 22.5-26.5%.

As leader of the biggest party in the winning alliance, she is the obvious choice to become Italy’s first woman prime minister, but the transfer of power is traditionally slow and it could take several weeks before the new government is sworn in.

Meloni, 45, plays down her party’s post-fascist roots and portrays it as a mainstream conservative group. She has pledged to support Western policy on Ukraine and not take undue risks with the third largest economy in the euro zone.

Italy has a history of political instability and the next prime minister will lead the country’s 68th government since 1946 and face a host of challenges, notably soaring energy costs and growing economic headwinds.

The outcome of the vote was also being watched nervously in European capitals and on financial markets, given the desire to preserve unity in dealings with Russia and concerns over Italy’s daunting debt mountain.

The new, slimmed-down parliament will not meet until Oct. 13, at which point the head of state will summon party leaders and decide on the shape of the new government.