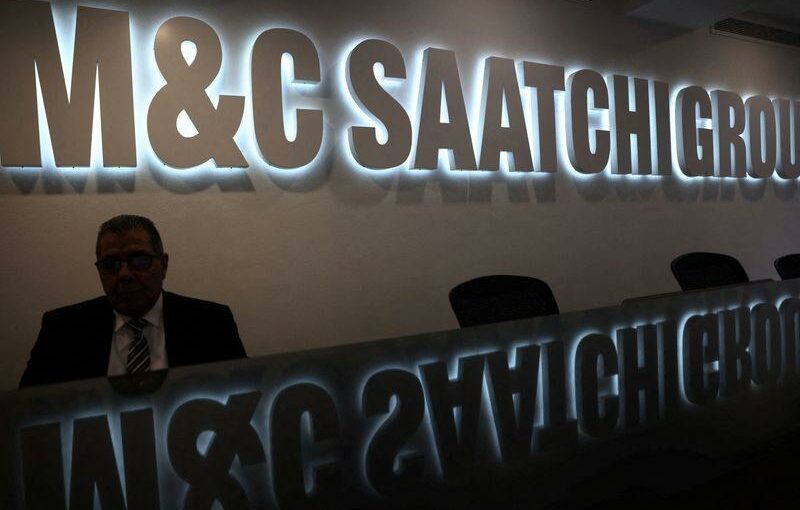 FILE PHOTO: Signage is seen at the reception of the M&C Saatchi office in central London, Britain, January 6, 2022. REUTERS/Henry Nicholls

LONDON (Reuters) -The biggest shareholder of M&C Saatchi, who has indicated she wants to buy the British advertising group, set out plans on Friday for an all share exchange merger with her acquisition vehicle, disappointing M&C’s investors.

Shares in one of the biggest names in British advertising fell 11% in early trades, following two days of gains, after Vin Murria’s vehicle AdvancedAdvT said a merger would provide cash to invest in the business, boosting its digital capabilities and deal-making firepower.

AdvancedAdvT, which does not own any other assets, raised 130 million pounds ($176 million) last year. Software entrepreneur Murria owns 13% of the vehicle, while private equity group Marwyn is the biggest shareholder.

Murria also owns 12.5% of M&C directly while AdvancedAdvT owns 9.8%. She is the deputy chairman of the ad group, which was founded in 1995 by brothers and ad moguls Maurice and Charles Saatchi.

“The combination of the M&C brand and platform with the company’s funding and experience is expected to increase the M&A opportunity pipeline,” AdvancedAdvT said in a statement.

M&C revealed on Thursday that Murria had told the group she intended to make a bid. It advised shareholders not to do anything, and said its new strategy was working well.