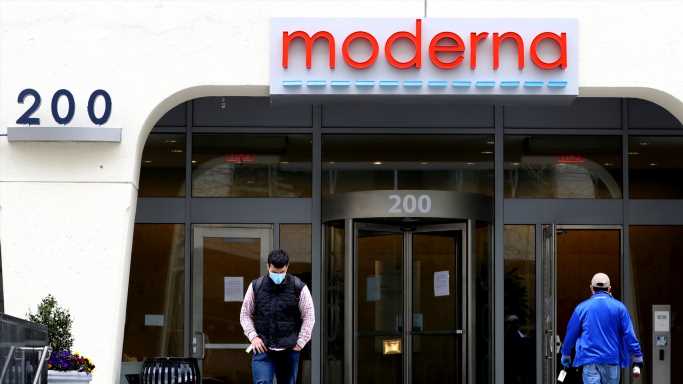 COVID-19 vaccine developer Moderna Inc. (NASDAQ: MRNA) is not exactly a meme stock but it traded like one Thursday on relatively heavy volume. According to a report in Barron’s, the company plans to announce two new vaccines at an investor conference Thursday. The first is a combined booster COVID-19 /flu vaccine known as mRNA-1073 and the other is a pediatric vaccine called mRNA-1365. As you might expect, the share price was rising and so were mentions on social media.

Another biotech stock also was getting a lot of mentions Thursday, but for all the wrong reasons. Humanigen Inc. (NASDAQ: HGEN) did not receive FDA emergency use authorization for its lenzilumab treatment for newly hospitalized COVID-19 patients. The company said the FDA was “unable to conclude that the known and potential benefits of lenzilumab outweigh the known and potential risks of its use as a treatment for COVID-19.” The stock was hammered on very heavy volume.

GameStop Corp. (NYSE: GME) reported quarterly results late Wednesday that sent shares down by more than 10% in early trading Thursday. Revenues were higher than expected, profits were lower, and the company’s executives were tight-lipped about their plans going forward. Not a happy combination. Boosters on social media, however, far outnumber naysayers, and social media mentions were up more than 150%.

AMC Entertainment Holdings Inc. (NYSE: AMC) saw its share price wobble and its social media mentions decline. After a nice gain on Tuesday, the stock slipped by 1% on Wednesday and traded down by as much as 4.3% early Thursday. Talking about AMC (or GameStop for that matter) as if fundamentals make any difference to share price moves may be good practice, it may not have much relation to reality.

3D-printing firm Nano Dimension Ltd. (NASDAQ: NNDM) was having a good day Thursday. The company had no significant news but will be introducing its new Fabrica 2.0 micro additive manufacturing system at a trade show in Chicago next week. Fabrica 2.0 produces micron-level precision for parts going into small medical devices, computer ships and other small electronics.