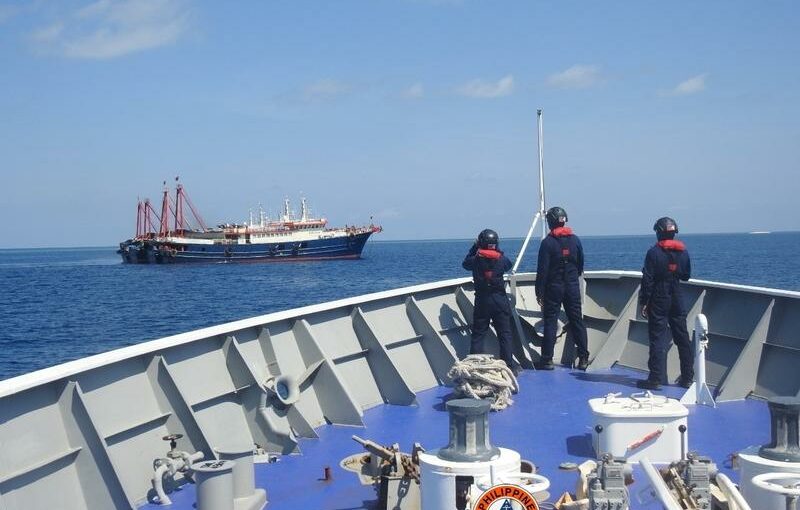 MANILA (Reuters) – The Philippines has protested China’s continuing “illegal presence and activities” near an island in the South China Sea held by the Southeast Asian nation, the foreign ministry said on Saturday.

Manila lodged the diplomatic protest on Friday over the “incessant deployment, prolonged presence, and illegal activities of Chinese maritime assets and fishing vessels” in the vicinity of Thitu island.

It demanded its giant neighbour withdraw the vessels.

The Chinese embassy in Manila did not immediately respond to a request for comment outside business hours.

Tensions between Manila and Beijing have escalated over the months-long presence of hundreds of Chinese boats in the Philippines’ 200-mile exclusive economic zone. The Philippines says it believes the vessels were manned by militia, while Beijing has said they were fishing boats sheltering from bad weather.

“The Pag-asa Islands is an integral part of the Philippines over which it has sovereignty and jurisdiction,” the foreign ministry said in a statement.

Thitu, known as Pag-asa in the Philippines, is 451 km (280 miles) from the mainland and is the biggest of the eight reefs, shoals and islands it occupies in the Spratly archipelago.

China has built a mini-city with runways, hangars and surface-to-air-missiles in the Subi Reef about 25 km (15 miles) from Thitu.

This was at least the 84th diplomatic protest the Philippines has filed against China since President Rodrigo Duterte took office in 2016.

An international tribunal that year invalidated China’s expansive claim in the South China Sea, where about $3 trillion worth of ship-borne trade passes annually. Brunei, Malaysia, the Philippines, Taiwan and Vietnam also have competing claims to various islands and features in the area.

Duterte shelved the favourable ruling and pursued a rapprochement with Beijing in exchange for pledges of billions of dollars of loans, aid and investment, much of which are pending.