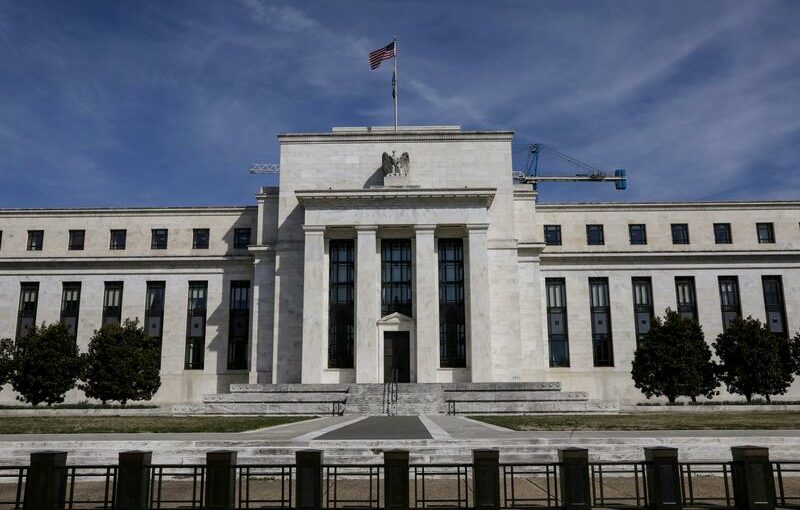 WASHINGTON (Reuters) – The Federal Reserve on Wednesday will release a readout of its April policy meeting, an event already overrun by data showing disappointing jobs growth and a spike in inflation that has kicked a debate about whether the U.S. central bank is off course into high gear.

Fed officials have pledged to keep their ultra-loose, crisis-fighting policies in place, betting that the unexpected surge in consumer prices last month stems from temporary forces that will ease on their own, and that the U.S. jobs market needs far more time to get people back to work.

Comments from Fed officials since the April 27-28 meeting have indicated that if anything the employment data from April cemented the view that it was still too early to discuss changes to the Fed’s $120 billion in monthly bond purchases. Discussion of raising the central bank’s benchmark overnight interest rate from the current near-zero level is even further down the road. (Graphic: Substantial further progress for the Fed? “Substantial further progress” for the Fed?, )

The minutes of the Federal Open Market Committee’s meeting last month’s are due to be released at 2 p.m. EDT (1800 GMT) and are expected to show at most one or two Fed officials urging quicker action to reduce the monetary policy support rolled out last spring to help the economy through the recession triggered by the coronavirus pandemic.

“Minutes from the April FOMC will be substantially stale” as the meeting was held before the release of the weaker-than-expected jobs growth and stronger-than-expected inflation data, Citi economists Andrew Hollenhorst and Veronica Clark wrote this week.

Hollenhorst and Clark still expect the Fed to begin trimming its asset purchases in December, but contingent on a “strong May jobs report” of at least 750,000 positions added.

Much will be riding on whether the May numbers start to resolve the dilemma presented to the Fed in April.

The U.S. economy added 266,000 jobs last month, roughly a quarter of the number expected by economists in a Reuters poll. The Labor Department also reported earlier this month that job openings hit a record high in March. To some analysts, the data suggested people were remaining on the sidelines for any number of reasons, from a fear of the coronavirus to the flow of federal unemployment benefits, and might take longer to return to work than expected. (Graphic: The jobs hole facing Biden and the Fed, )

Inflation, meanwhile, rose faster than anticipated in April, posing a potential clash between the Fed’s two goals of maximizing employment while keeping price increases in check, and stoking debate over whether wide-open monetary policy is out of synch with where the economy now stands.

The Fed will hold its next meeting in June, when officials will not only issue a new policy statement but update their projections for growth, inflation, unemployment, and the appropriate path of the Fed’s target interest rate.

Along with faster-than-expected inflation, more recent surveys showed consumer expectations about future price increases were also rising, possibly chipping away at the central bank’s confidence that public attitudes about inflation were “well-anchored.”

Faith that expectations will remain tempered even as prices jump around in the short run is central to the Fed’s outlook, and some analysts suggest it may be hard for officials to ignore just how long it might take to get product, commodity, and labor markets reopened and back to normal.

“It remains surprising how many Fed officials describe expectations as ‘well-anchored’ despite those expectations measures being very much on the move,” Karim Basta, chief economist at III Capital Management, wrote last week.