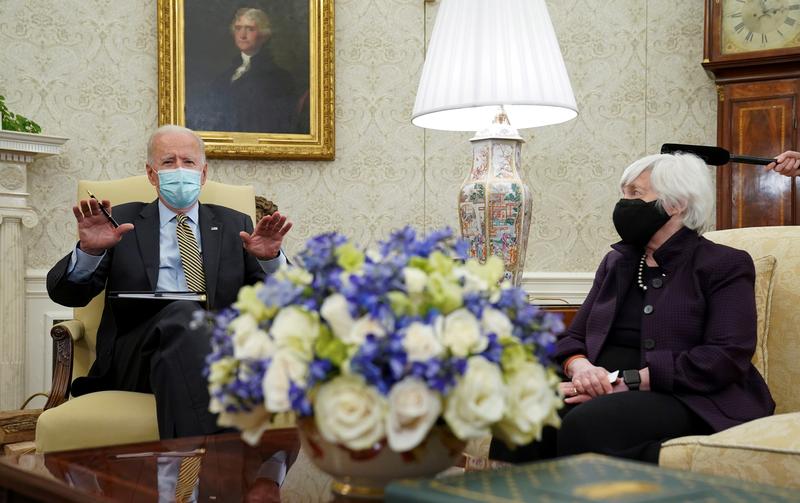 WASHINGTON (Reuters) -Financial regulators assured President Joe Biden on Monday that the U.S. financial system is in good shape and that financial risks are being mitigated by strong liquidity in the banking system, the White House said.

White House officials said Treasury Secretary Janet Yellen, Federal Reserve Chair Jerome Powell, and acting Comptroller of the Currency Michael Hsu, as well as the heads of the Commodity Futures Trading Commission, Securities and Exchange Commission, and the Consumer Financial Protection Bureau, were among those who met Biden.

The meeting was Biden’s first face-to-face encounter with many of the leading federal regulators of the banking industry and financial markets, including Powell. The Fed chief was appointed by former President Donald Trump.

“The regulators reported that the financial system is in strong condition. They further indicated that financial risks are being mitigated by robust capital and liquidity levels in the banking system, and healthy household balance sheets stemming from fiscal support and the ongoing economic recovery,” the White House said in a statement.

No policy decisions were expected to be made at the routine meeting, said White House press secretary Jen Psaki.

Biden is seeking to use trillions of dollars in government spending to prod a strong rebound from the coronavirus-triggered recession that put millions of Americans out of work.

A nearly 12% gain in the S&P 500 stock index this year has helped fuel hopes of a strong recovery, but markets are closely watching inflation and government borrowing costs for signs of trouble.

Biden issued here an executive order in May pushing federal agencies to encourage full disclosure of often-hidden climate-related risks to banks, other financial institutions and the federal government.

The White House statement on the meeting said regulators reported that they were making “steady progress” on Biden’s climate-related executive order, and discussed ideas for promoting financial inclusion and for “responsibly increasing access to credit for potential homeowners and small businesses.”