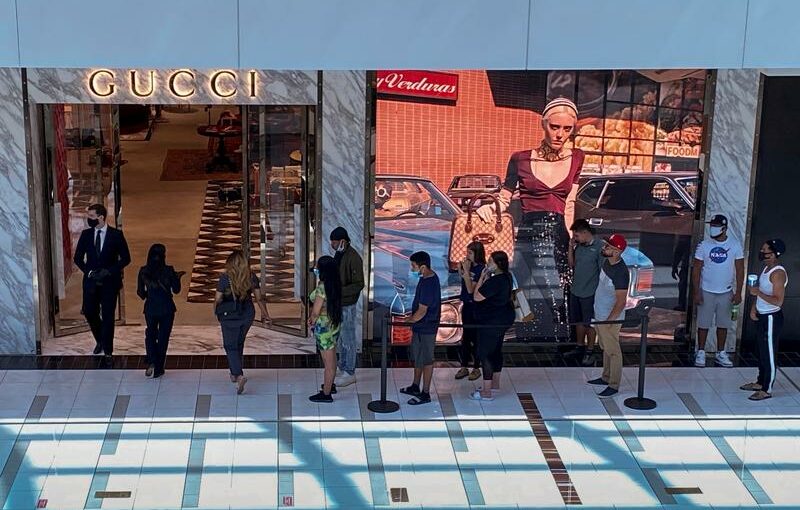 FILE PHOTO: Customers line up to enter a Gucci fashion store at the The Galleria shopping mall after the mall opened during the coronavirus disease (COVID -19) outbreak in Houston Texas, U.S., May 1, 2020. REUTERS/Adrees Latif/File Photo

Gucci drives the bulk of revenues and profits at the French conglomerate, and has been one of the industry’s top performers in recent years.

But it has struggled more than some peers in the COVID-19 crisis, despite a rebound in luxury goods demand in regions like Asia which fuelled resurging sales at rivals such as LVMH’s Louis Vuitton.

Kering, which also owns brands such as Saint Laurent, said revenue for the whole group fell 8.2% to 4 billion euros ($4.83 billion) for the October to December period, down 5% on a comparable basis and missing a UBC consensus forecast for growth of nearly 1%.

Gucci’s sales were down 10.3% in the quarter on a comparable basis, when analysts had expected a 4% drop.

Kering’s Financial Chief, Jean-Marc Duplaix, told reporters the group was satisfied with Gucci’s performance, adding that the brand had many initiatives planned to return to growth in 2021, its 100th anniversary.

Duplaix said trends across China and Asia as well as the United States remained supportive in the first weeks of the year for the luxury market, although Europe was more difficult.

Restrictions on travel, dining out and other activities like skiing remain in place in many countries to fight the COVID-19 pandemic, weighing on tourist inflows and spending.