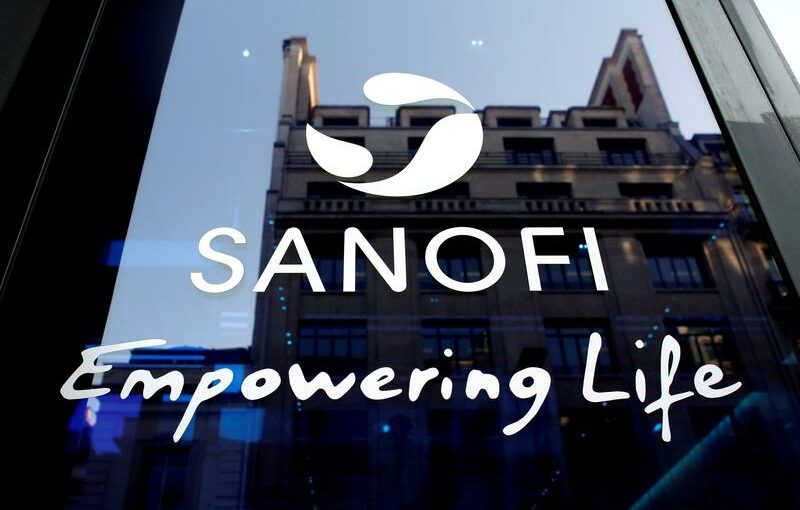 PARIS (Reuters) -Sanofi is dropping plans for its own mRNA-based COVID-19 vaccine because of the dominance achieved by BioNTech-Pfizer and Moderna in using the technology to fight the pandemic, the company said on Tuesday.

The move highlights the challenges of competing in particular with pioneer BioNTech, which rose from obscurity through its alliance with pharma major Pfizer last year. They have delivered close to 1.5 billion doses so far to become the Western world’s largest COVID-19 vaccine maker.

French healthcare group Sanofi will instead focus on efforts with British partner GlaxoSmithKline to bring another COVID-19 vaccine candidate to market based on the more conventional protein-based approach, where mass trials are ongoing.

The decision to drop clinical development of a shot based on mRNA, or messenger RNA, acquired as part of its takeover of Translate Bio, came despite positive Phase I/II study interim results here announced on Tuesday, where participants’ blood readings showed a strong immune reaction.

But Sanofi said the read-out encouraged it only to pursue the technology as a potential vaccine against influenza and other diseases, giving up on the area of COVID-19 because of the strong market presence of the two approved mRNA shots.

“The results are extremely important as they show us that the platform we acquired works,” Thomas Triomphe, head of the Sanofi Pasteur vaccines division, told journalists. He said kicking off final Phase III trials now made no sense.

He said that by May or June 2022, some 24 billion doses of COVID-19 jabs made by different manufacturers would already have been delivered, adding to the disincentives to produce a new vaccine candidate when COVID-19 was unlikely to require an annual vaccination, unlike the flu.

“The decision to end RNA looks to be interpreted as positive since they will save development costs and concentrate on other products and ventures,” said Ion-Marc Valahu, a fund manager at Geneva-based investment firm Clairinvest.

But Sanofi’s comparatively slow progress in developing a COVID-19 vaccine – its project with GSK was delayed late last year – has been a blow to its prestige and lamented by some French politicians.

The company said it started testing an mRNA shot against seasonal influenza in humans in June and would launch follow-on clinical studies next year.

The development of RNA flu shots is already shaping up to be a tight race as drugmakers hope they can more quickly adjust the vaccine to ever-changing strains in circulation.

Pfizer said this week it had started testing an mRNA flu vaccine. Moderna has several influenza vaccine candidates in development, including combinations that include a COVID-19 booster.

Sanofi reported 2.5 billion euros ($2.9 billion) in sales from flu vaccines in 2020, the largest of its vaccine business, which recorded total sales of 5.9 billion euros.

The mRNA COVID-19 vaccines trick the human body into producing proteins known as antigens that are found on the surface of the coronavirus that causes the disease. That primes the immune system to quell future infections.

Under the more traditional protein-based vaccine approach that Sanofi will now focus on, the antigen is bioengineered in labs and combined with an efficacy booster known as an adjuvant, provided by GSK.

Triomphe said the European Union and Britain had ordered 75 million doses of this vaccine, banking on future regulatory approval.

German biotech firm CureVac earlier this month also acknowledged rivals’ dominance when it cancelled some of the contract manufacturing deals for its experimental mRNA COVID-19 vaccine with two prospective partners.

CureVac’s product is under review by the EU’s drugs regulator, with an uncertain outcome after disappointing trial results.