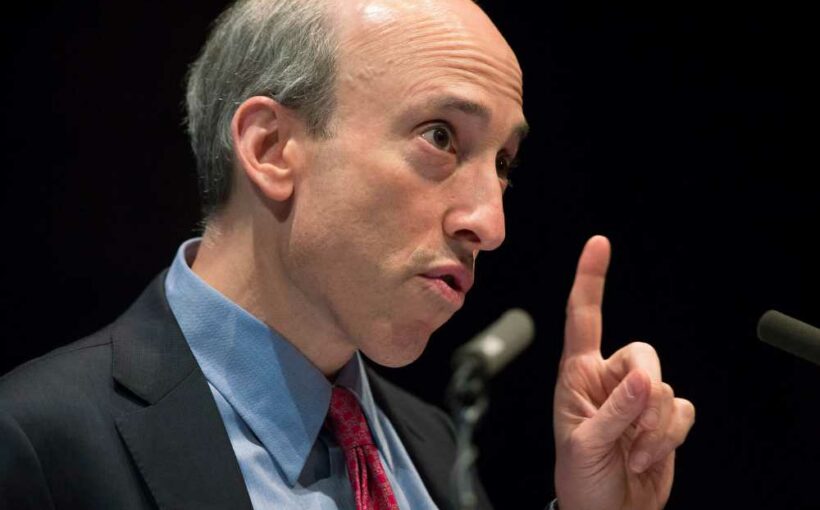 New Securities and Exchange Commission Chairman Gary Gensler will testify before the House Financial Services Committee on Thursday. This is the third House hearing focused on GameStop, but this is Gensler's first appearance as chairman before the Committee.

Gensler's prepared testimony indicates he will address a broad range of topics around Gamestop and protection of investors, including:

Gensler will begin his testimony on the increasing gamification of trading, which he defined as trading that has "game-like features" — such as points, rewards, leaderboards, bonuses, and competitions — to increase engagement.

"Many of these features encourage investors to trade more," Gensler said. "Some academic studies suggest more active trading or even day trading results in lower returns for the average trader."

Gensler said he has asked his staff to prepare a request for public input: "We need to ensure investors using apps with these types of features continue to be appropriately protected."

Many brokers now send their orders to market makers in exchange for payments, a process known as "payment for order flow."  The market makers can either execute the orders directly or pass it on to an exchange or other trading venues.

Because higher levels of trading generate more payment to brokers, Gensler asked: "Do broker-dealers have inherent conflicts of interest? If so, are customers getting best execution in the context of that conflict? Are broker-dealers incentivized to encourage customers to trade more frequently than is in those customers' best interest?"

Gensler did not directly address these questions, but implied the recent enforcement action against Robinhood was a warning sign. "Robinhood explicitly offered to accept less price improvement for its customers in exchange for receiving higher payment for order flow for itself. As a result, many Robinhood customers shouldered the costs of inferior executions; these costs might have exceeded any savings they might have thought they'd gotten from a zero commission."

That payment for order flow has turned into a lucrative business. Gensler says about 38% of equity trading volume is executed by those off-exchange wholesalers. Citadel Securities, Gensler noted, has publicly stated that it executes about 47% of all retail volume.

Gensler asked if this concentration was consistent with the SEC's mandate to promote fair, orderly, and efficient markets.  "History and economics tell us that when markets are concentrated, those firms with the greatest market share tend to have the ability to profit from that concentration," he said, "I've asked staff to look closely at these issues to determine which policy approaches may be merited."

Citadel Securities declined to comment. However, in testimony in February of this year in the House of Representatives, Citadel founder Ken Griffin said: "With respect to payment for order flow, we simply play by the rules of the road. Payment for order flow has been expressly approved by the SEC. It is a customary practice within the industry. If they choose to change the rules of the road, we need to drive on the left side versus the right side, that's fine with us."

Short positions: Should they be disclosed?

That has led to calls that short sellers should also be required to disclose their positions:  "Enhancing disclosures could improve market efficiency and end some wild speculation (and misinformation) about short selling and short positions," Tyler Gellasch, executive eirector of Healthy Markets, said in an open letter to Gensler.

Gensler told the committee he has directed SEC staff to prepare recommendations for the SEC's consideration on short selling disclosure.

Though unrelated to GameStop, Gensler also brought up the failure of Archegos Capital Management and the losses incurred by several banks that provided prime brokerage services to them. The "core" of the problem, Gensler said, was Archegos' use of total return swaps based on underlying stocks, and the significant exposure that the prime brokers had to the family office.

Gensler said he has asked his staff for recommendations on whether to include total return swaps and other security-based swaps under new disclosure requirements.

Gensler also raised concerns that wrongdoers will attempt to use social media to hype stocks or manipulate markets.  He offered no specific suggestions, but said that "This is an area for which we will continue to deepen our understanding, resources, and capabilities."

Gensler noted that "at least one firm didn't have sufficient liquidity to meet margin calls and had to fundraise within hours to meet $1 billion-plus obligations, and several brokers chose to shut down customer access to trading."  Gensler said this raised questions about whether margin requirements are sufficient, and whether broker-dealers have appropriate tools to manage their liquidity and risk. "I've asked staff to look at these issues carefully," he said.

Stocks currently take two days after a trade is made to settle, a convention known as "T + 2."  Gensler noted that "the longer it takes for a trade to settle, the more risk our markets assume" and that the technology exists to eventually shorten the settlement cycle to T + 1 or even same-day settlement.  "I've directed the SEC staff to put together a draft proposal for the Commission's review on this topic," he said.

Where is the SEC going?

While Gensler's comments lacked specifics, analysts noted that his comments clearly indicated the direction he was taking the SEC on these issues.

"This is the first time he has come out, and he is pretty negative on payment for order flow and the concentration of market makers," Rich Repetto from Piper Sandler told me, noting his remarks were "troublesome for e-brokers and market makers."

Repetto also said not to mistake the lack of specifics for lack of direction:  "When he says he is 'directing' his staff he is implying there is going to be some kind of action," noting that the committee will now expect some kind of update on what the SEC is doing in the coming months.

Indeed, Gensler told the committee his staff would be publishing a report on market events over the summer.

Gensler also left the door open to enforcement actions against those violating SEC rules:  "While I cannot comment on ongoing examination and enforcement matters, SEC staff is vigorously reviewing these events for any violations. I also have directed staff to consider whether expanded enforcement mechanisms are necessary."