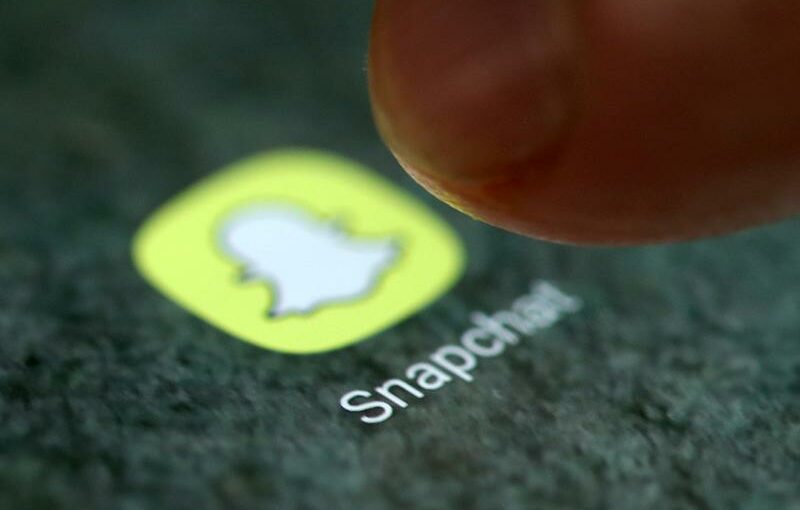 (Reuters) -Snap Inc said on Wednesday it will lay off 20% of all staff and shut down projects, including mobile games and novelties like a flying drone camera, as high inflation and a deteriorating economy ravage the advertising industry.

FILE PHOTO: The Snapchat app logo is seen on a smartphone in this picture illustration taken September 15, 2017. REUTERS/Dado Ruvic/Illustration/File Photo

The cuts will help the company save an estimated $500 million in costs annually, Snap said.

Snap shares rose 15% in morning trading, which reverberated across the sector. Shares in Facebook parent Meta Platforms Inc were up 5% and Pinterest Inc rose 6%.

The company said it will focus on improving sales and the number of Snapchat users.

The “clear and defining action” to refocus its business has reassured investors, said Paolo Pescatore, an analyst at PP Foresight.

Analysts and investors have viewed Snap as an early indicator for trends affecting other social media platforms, as Snap is usually first to report quarterly earnings or provide business updates.

Snap’s warning in May that it would miss its revenue targets due to worsening economic conditions sparked a sell-off in social media stocks.

Shares in Santa Monica, California-based Snap closed down 2.5% at $10 on Tuesday after The Verge first reported Snap’s plans for layoffs, and AdAge reported the departure of two top advertising executives.

Revenue growth so far in the third quarter is up 8% from the previous year, which is “well below what we were expecting”, Chief Executive Evan Spiegel wrote in a memo to employees that was also released publicly on Wednesday.

If that growth rate holds, it would be the slowest revenue growth Snap has had since becoming a public company in 2017 – a far cry from triple-digit growth rates it has recorded in previous quarters.

Gorman and Naylor’s departures come after Snap reported a disappointing second quarter, and it is facing more competition from TikTok, she said.

“Snap is clearly going through a tough time,” Enberg said.

Despite reducing spending in some areas, Snap must now “face the consequences of our lower revenue growth and adapt to the market environment”, CEO Spiegel wrote in the memo.

Senior vice president of engineering Jerry Hunter will be promoted to chief operating officer and will be responsible for improving coordination between engineering, ad sales and product teams, Spiegel said.

Snap and other social media platforms including Meta have all suffered from privacy updates that Apple Inc introduced on iPhones last year.

These have made it difficult for digital ad sellers and advertisers to target ads to relevant audiences and measure their sales results.

Closer collaboration between engineering and sales could potentially help Snap improve targeting and measurement of its ads.

The restructuring of the ad sales division also includes three new president roles that will oversee the Americas, Europe, Middle East and Africa, and Asia-Pacific regions.

Snap will also discontinue investment in its Pixy flying drone camera, just a few months after its debut in May.