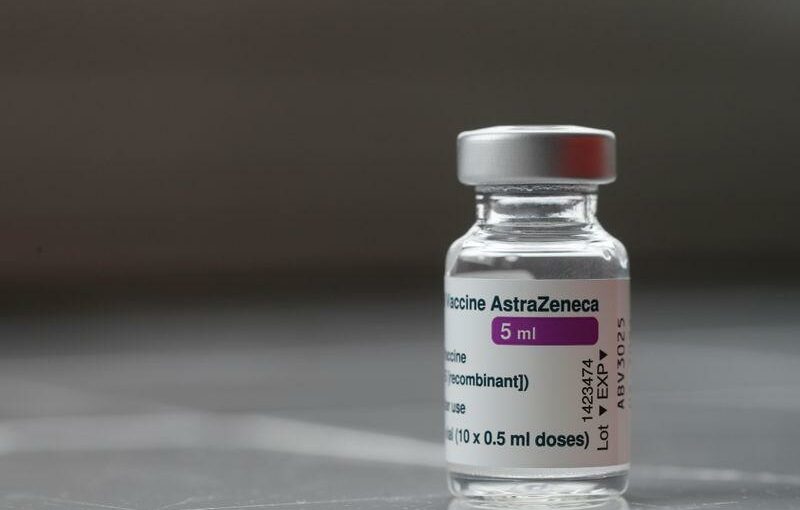 JOHANNESBURG (Reuters) – South Africa’s health minister said on Wednesday the government may sell or swap its doses of the AstraZeneca COVID-19 vaccine, but it would wait for advice from scientists as it prepares to roll out an alternative U.S. shot next week.

A vial of the Oxford-AstraZeneca COVID-19 vaccine is pictured at the Foch hospital in Suresnes, near Paris, France, February 8, 2021. REUTERS/Benoit Tessier

South Africa paused the rollout of the vaccine developed by AstraZeneca and Oxford University following data in a small clinical trial that showed it did not protect against mild to moderate illness from the 501Y.V2 variant of the coronavirus now dominant in the country.

One million doses of the AstraZeneca vaccine, produced by the Serum Institute of India, landed in the country last week, and another 500,000 are due to arrive in the coming weeks. South Africa was also expecting to receive AstraZeneca shots via the COVAX global vaccine distribution scheme co-led by the World Health Organization and an African Union (AU) arrangement.

Health Minister Zweli Mkhize told a news conference the country would start vaccinating health workers with Johnson & Johnson’s vaccine in the form of an “implementation study” with researchers some time next week.

“Why not sell the AstraZeneca to other countries, well it’s an option, … we will consider it. First our scientists will tell us what we do with it, can we use it within the time that’s available … before it expires,” Mkhize said.

“If not, can we swap it with anyone else, because we’ve discussed it with COVAX and with AVATT (the AU’s vaccine task team), so we will see what we will do.”

The government’s Ministerial Advisory Committee should be able to give a considered view on how to deal with the AstraZeneca vaccines in the next week or two, Mkhize said, adding that the government had also secured vaccine doses from Pfizer for health workers.

Negotiations with Moderna, China’s Sinopharm and over Russia’s Sputnik V vaccine are ongoing.

Mkhize said the first batch of J&J doses would not be a lot compared to the total the country was hoping to order.

“It’s possible that the first batch would actually be not paid for, because it would be covered more as the research stock. So if we are able to achieve that it’s fine, but if we have got to pay for it we have got no problem,” he said.

The J&J vaccine was 89% effective at preventing severe disease and 57% against moderate-to-severe disease in the South African leg of a global trial. Ninety-five percent of infections observed in the local study were due to the 501Y.V2 variant first identified late last year.

The 501Y.V2 variant has alarmed health experts who have raised concerns about its ability to potentially evade the immune response generated by prior exposure to the coronavirus or vaccines.

South Africa’s neighbour eSwatini said on Tuesday that it would not be using the AstraZeneca vaccine.

South Africa hopes to vaccinate 40 million people, or two-thirds of its population, to achieve some level of herd immunity.