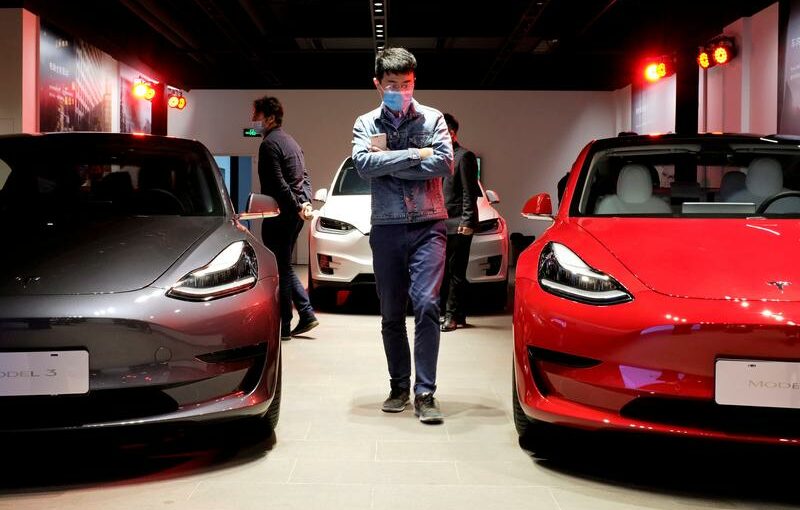 (Reuters) – The Chinese military has banned Tesla cars from entering its housing complexes, citing security concerns over cameras installed on the vehicles, two people who have seen notices of the directive told Reuters.

The move is the latest sign of China’s growing scrutiny of the U.S. electric carmaker amid tensions with Washington and analysts said it bore close resemblance to U.S. measures against Chinese telecoms firm Huawei on national security grounds.

Tesla won strong backing from Shanghai when it built its first overseas factory there in 2019 and its sleek Model 3 sedans were the best-selling electric vehicle in the country before being overtaken by a much cheaper micro EV last year.

The directive advises Tesla owners to park their cars outside military property and residents were notified of the restrictions this week, the two sources said, declining to be named due to the sensitivity of the issue.

Pavel Molchanov, an analyst at Raymond James & Associates, said the latest restrictions on Tesla were a close parallel to the U.S. government’s hostility towards Huawei on concerns that Beijing could have access to U.S. telecoms infrastructure.

“Even if such concern is exaggerated, it can create dislocation for the companies directly affected,” he said.

Separately, the Wall Street Journal reported that China’s government was restricting the use of Tesla cars by personnel at military, state-owned enterprises in sensitive industries and key agencies. (on.wsj.com/3r2NnVe)

It was not immediately clear whether the measure applied to all such facilities. The move came after a government security review of Tesla’s vehicles, the Wall Street Journal reported, citing people familiar with the effort.

Tesla sold 147,445 cars in China last year, or 30% of its total deliveries, though it is facing growing competition from domestic rivals such as Nio Inc and Geely.

The military’s apparent concerns about Tesla underscore a broader issue for automakers as they equip more vehicles with cameras and sensors that capture images of a car’s surroundings.

Who controls how those images are used and where they are sent and stored is a fast-emerging challenge for the auto industry and regulators around the world.

Tesla cars have several external cameras to assist with parking and self-driving and Chief Executive Elon Musk has often spoken about the value of the data Tesla vehicles capture that can be used to develop autonomous driving.

Tesla’s Model 3 and Model Y also have cameras in the rear view mirror for driver safety that are disabled by default.

“China has an array of tools – some direct, some indirect – for putting the heavy on foreign companies like Tesla. The pressure can come from any direction, for any reason at any time,” said Michael Dunne, chief executive of consultancy ZoZo Go.

It was not immediately clear whether the Tesla decision was related to heightened U.S.-China tensions.

A Chinese state regulator said in February that government officials had met representatives from Tesla over reports from consumers about battery fires, unexpected acceleration and failures in over-the-air software updates.