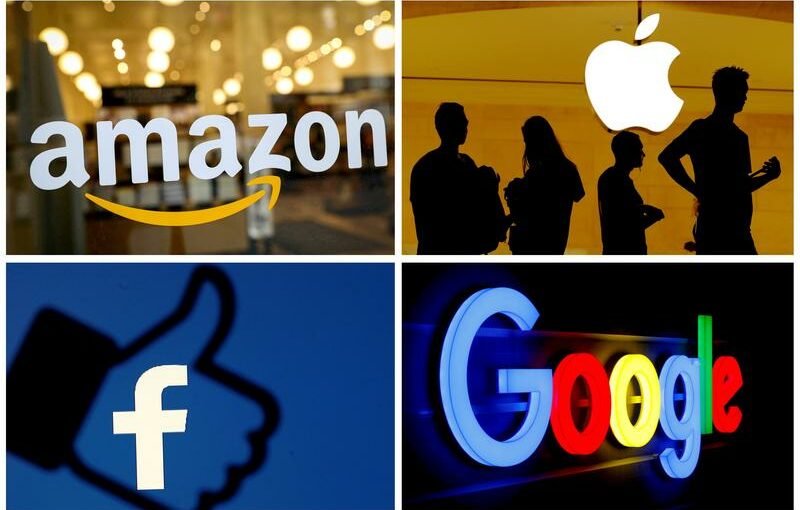 FILE PHOTO: The logos of Amazon, Apple, Facebook and Google in a combination photo

WASHINGTON (Reuters) – Lawmakers in the House of Representatives are working on drafts of five antitrust bills, four of them aimed directly at reining in Big Tech, and may introduce them within days, according to three sources familiar with the matter.

Reuters has read discussion drafts of five measures. Sources familiar with the process say they may be changed before they are introduced. They may be introduced this week but that may be delayed, two sources said.

Among the five bills being considered, two address the problems of platforms, like Amazon.com, creating a space for businesses to sell products and then competing against those products.

One of the two would make it illegal in most cases for a platform to advantage its own products on its platform with potentially a fine of 30% of the U.S. revenues of the affected business if they violate the measure. A second requires platforms to sell any business if owning it creates an incentive for the platform to advantage its own products or lines of business.

A third bill would require a platform to refrain from any merger unless it can show the acquired company does not compete with any product or service the platform is in.

A fourth would require platforms to set up a way for users to transfer data if they desire, including to a competing business. A fifth is similar to a Senate measure that would raise what the Justice Department and Federal Trade Commission (FTC) charge to assess the biggest companies to ensure their mergers are legal and increase the budget of the agencies.

The House Judiciary Committee’s antitrust panel wrote a report that was issued in October 2020 that spelled out abuses by four big technology companies, Alphabet Inc’s Google, Apple Inc, Amazon.com and Facebook. The report — which was scathing — suggested expansive changes to antitrust law.