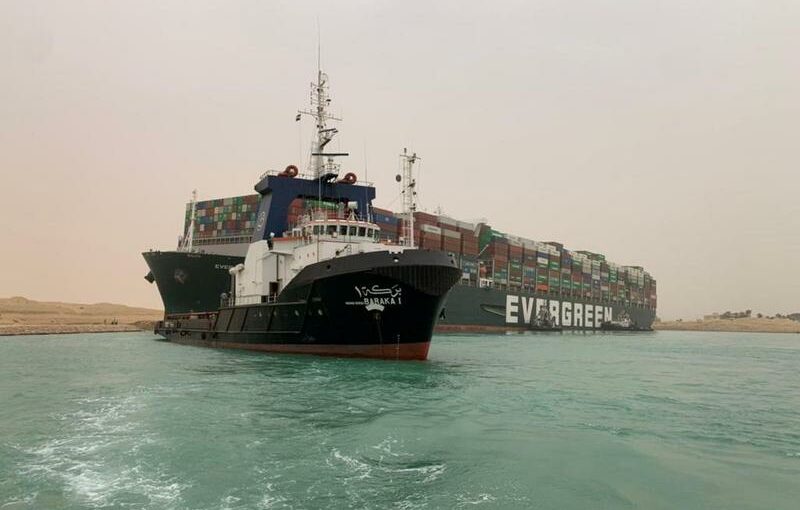 CAIRO (Reuters) – The shortest shipping route from Europe to Asia remained blocked on Wednesday as eight tug boats struggled to free one of the world’s largest container ships after it ran aground in the Suez Canal.

GAC, a Dubai-based marine services company, said authorities were still working to free the ship mid-afternoon on Wednesday, and that information it had received earlier claiming the vessel was partially refloated was inaccurate.

The 400-metre, 224,000-tonne Ever Given ran aground on Tuesday morning after losing the ability to steer amid high winds and a dust storm, the Suez Canal Authority (SCA) said in a statement.

About 30% of global container ship traffic passes through the canal each day, carrying everything from fuel to consumer goods. The main alternative route for ships travelling between Asia and Europe, around the African cape, takes a week longer to navigate.

Pictures posted on social media appeared to show the ship positioned diagonally across the canal, blocking its full width. Photos shared by the SCA showed a digger removing earth and rock from the bank of the canal around the ship’s bow.

The SCA’s chairman told local media that despite the blockage, a southbound convoy was on the move and that the authority was trying to keep traffic flowing between waiting areas as best it could while salvage efforts continued.

“Once we get this boat out, then that’s it, things will go back to normal. God willing, we’ll be done today,” Chairman Osama Rabie said. The authority was considering compensation for delayed ships, he said.

About 12% of world trade by volume passes through the canal, and it is a major source of hard currency for Egypt.

Tracking maps had shown the ship grounded in the southernmost stretch of the waterway, between the Great Bitter Lake and the Red Sea port of Suez.

At least 30 ships were blocked to the north of the Ever Given, and three to the south, local sources said. Several dozen ships could also be seen grouped around the northern and southern entrances to the canal.

The SCA said it was trying to rebalance the ship, and local sources said efforts could shift towards digging the ship out if the tug boats were unable to release it.

Dutch marine services company Boskalis said its subsidiary Smit Salvage had been hired to help with the operation and was sending 10 people to Egypt.

In such cases, “you really have to do the calculations to understand how solidly she (is) grounded, and how much power you can exert without damaging the vessel,” Boskalis spokesman Martijn Schuttevaer told Reuters.

Bernhard Schulte Shipmanagement (BSM), the ship’s technical manager, said the Ever Given had run aground in the canal at around 05:40 GMT on Tuesday. It said an investigation was underway.

BSM, which handles the ship’s crew and technical issues, said all the crew were safe and there had been no reports of injuries or pollution. It said it had notified the authorities and “interested parties”, but that it could not confirm the ship’s owner.

Taiwan’s Evergreen Marine Corp, which is leasing the vessel, said the shipowner had told it the ship “was suspected of being hit by a sudden strong wind, causing the hull to deviate from (the) waterway and accidentally hit the bottom”.

The ship is likely to have been insured for around $100 million, said Marcus Baker, global head of marine and cargo at insurance broker Marsh in London.

As of Wednesday, five laden LNG tankers were unable to pass through the canal due to the grounded container ship, according to data intelligence firm Kpler.

Of the five, three were bound for Asia and two for Europe, said Kpler analyst Rebecca Chia. She said that if the congestion persists until the end of this week, it would affect the transit of 15 LNG tankers.

“It increases the risk that we might see additional port congestion in European ports in the next week,” said Lars Jensen, chief executive at SeaIntelligence Consulting.