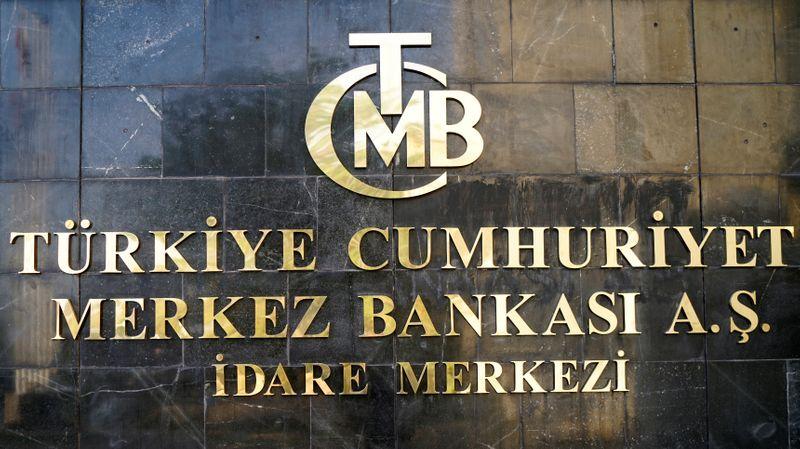 ISTANBUL (Reuters) – Turkey’s central bank held interest rates steady at 17% as expected on Thursday and kept up a hawkish tone, promising tighter policy if needed to rein in inflation that has risen to 15%.

FILE PHOTO: A logo of Turkey’s Central Bank (TCMB) is pictured at the entrance of the bank’s headquarters in Ankara, Turkey April 19, 2015. REUTERS/Umit Bektas

The bank repeated it will keep monetary policy tight to create “a strong disinflationary effect” until annual inflation, which has remained mostly double-digits for three years, falls to a 5% target in the next three years.

Governor Naci Agbal hiked the one-week repo rate by 675 basis points in November and December to pull the lira up from a record low, prompting a jump in foreign investment inflows.

In the last two months the bank has held rates steady at 17% – the highest in any advanced or emerging economy. Rate cuts are not expected until about the third quarter when inflation is seen easing.

“Cuts are still some way off,” said Jason Tuvey at Capital Economics. “Investors have become confident that the shift to orthodoxy will stick” despite signs the economic recovery has faltered in recent months, he said.

The lira firmed 0.6% to 6.9425 against the dollar. After a 20% decline last year, the currency has rebounded by as much in the past three months, outstripping emerging market peers due to the monetary tightening.

Erdogan fired the last two bank chiefs after short stints, stoking worry among investors that Agbal may not see through the tightening plan.

The median estimate in a Reuters poll of 21 economists was for no policy change on Thursday, while five expected a hike to as high as 18%.

“The tight monetary policy stance will be maintained decisively…for an extended period until strong indicators point to a permanent fall in inflation and price stability,” the bank’s policy committee said after its monthly meeting.

“Additional monetary tightening will be delivered if needed,” it added.

In his first interview since taking office, Agbal told Reuters this month he does not expect the bank to consider rate cuts until much later this year given upward inflation pressure, and rate hikes are still a possibility.

His comments reinforced a growing view among investors that the bank is in no rush to ease. Inflation has risen in the last several months, with food prices up more than 20%, pinching Turks during the coronavirus pandemic.

Erdogan, who has long held the unorthodox view that high rates cause inflation, appointed Agbal as part of a surprise leadership overhaul in which he pledged a new market-friendly economic era.