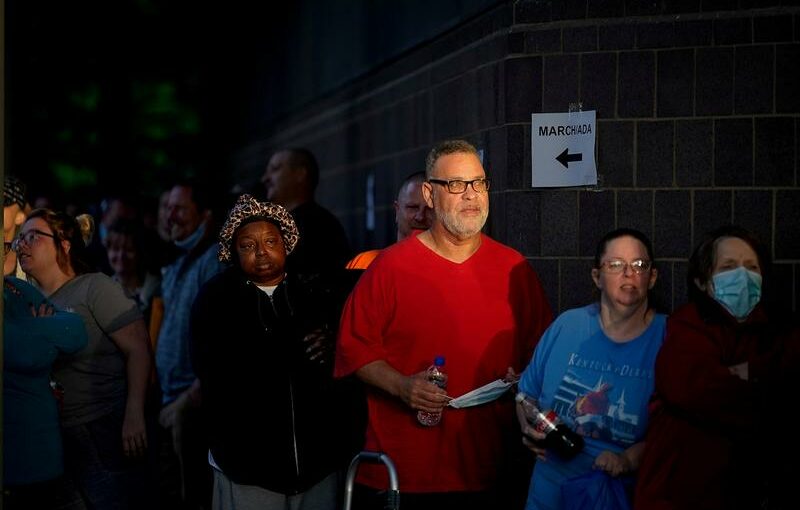 FILE PHOTO: Hundreds of people line up outside the Kentucky Career Center, over two hours prior to its opening, to find assistance with their unemployment claims in Frankfort, Kentucky, U.S. June 18, 2020. REUTERS/Bryan Woolston

(Reuters) – U.S. business leaders expect to cut fewer jobs and a growing number plan to sharply raise employees’ pay in the months ahead as confidence in the economic outlook surges amid the rollout of COVID-19 vaccines, a survey released on Thursday showed.

The Conference Board’s “Measure of CEO Confidence” showed chief executives were the most confident they had been since 2004.

It also indicated that 36% of CEOs planned pay increases for their employees of more than 3% in the next 12 months, up from 22% in the previous survey in September. And just 12% expect to cut jobs in the next year, down from 34% previously.

The survey, conducted between Jan. 14 and Jan. 29, also found that 45% of CEOs expect to increase capital spending, up from 25% in September, and 47% plan to expand their workforce, up from 33%.

The report may foreshadow a long-hoped-for improvement in a U.S. labor market that is still deeply scarred by the pandemic and its disruptions to businesses and everyday life.

A Labor Department report released on Thursday showed first-time filings for unemployment benefits rose unexpectedly last week and that as of the end of January, more than 18 million people without work were still receiving some kind of government jobless benefit.