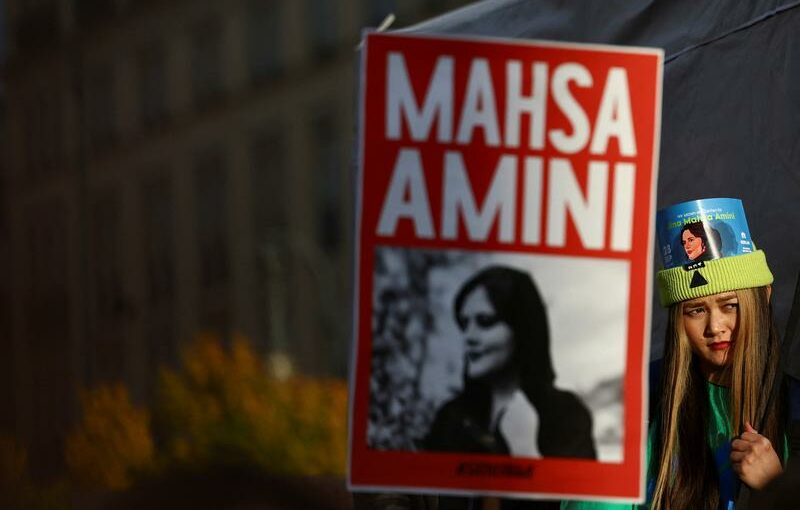 WASHINGTON/BRUSSELS (Reuters) – The West on Monday stepped up pressure on Iran over its crackdown on protests as the United States, European Union and United Kingdom imposed fresh sanctions on Tehran.

FILE PHOTO: A demonstrator looks on during a protest following the death of Mahsa Amini in Iran, near the Brandenburg Gate, in Berlin, Germany, September 28, 2022. REUTERS/Lisi Niesner/File Photo

The actions, which reflect a deterioration in the West’s already dire relations with Tehran in recent months, are the latest response to Iran’s deadly clampdown on unrest after the death of young Iranian Kurdish woman Mahsa Amini in morality police custody in September.

The protests by Iranians from all walks of life mark one of the boldest challenges to the ruling theocracy since the 1979 Islamic Revolution. Iran accuses Western powers of fomenting the unrest, which security forces have met with deadly violence.

The United States targeted the powerful Islamic Revolutionary Guard Corps (IRGC) and senior officials in its action, which imposed sanctions on the IRGC Cooperative Foundation and five of its board members, Deputy Minister of Intelligence and Security Naser Rashedi and four senior IRGC commanders in Iran.

The U.S. Treasury Department said the action targets a “key economic pillar of the IRGC, which funds much of the regime’s brutal suppression; as well as senior security officials coordinating Tehran’s crackdown at the national and provincial levels.”

Washington has accused the IRGC of continuing to aggressively crack down on peaceful demonstrations and said it has played “a leading role in suppressing protests through extensive human rights abuses.”

The IRGC was set up shortly after the 1979 Islamic Revolution to protect the Shi’ite clerical ruling system. It has an estimated 125,000-strong military with army, navy and air units, and commands the Basij religious militia often used in crackdowns.

The Treasury described the IRGC Cooperative Foundation – already under U.S. sanctions – as an economic conglomerate established by senior officials of the group to manage its investments and presence in sectors of Iran’s economy.

The Treasury accused the IRGC Cooperative Foundation of having become “a wellspring of corruption and graft” and said funds from it have supported the IRGC’s military adventures abroad.

“Along with our partners, we will continue to hold the Iranian regime accountable so long as it relies upon violence, sham trials, the execution of protesters, and other means of suppressing its people,” the U.S. Treasury’s under secretary for terrorism and financial intelligence, Brian Nelson, said in a statement.

The European Union imposed sanctions on more than 30 Iranian officials and organizations, including units of the Revolutionary Guards, blaming them for a “brutal” crackdown on protesters and other human rights abuses.

Foreign ministers from the EU’s 27 member countries agreed on the measures at a meeting in Brussels.

Those sanctions targeted units and senior officials of the IRGC across Iran, including in Sunni-populated areas where the state crackdown has been intense, a list published in the EU’s Official Journal showed.

The new sanctions were imposed on 18 people and 19 entities. Those targeted cannot travel to the EU, and any assets they hold inside the bloc can be frozen.

Some EU governments and the European Parliament have made clear they want the IRGC as a whole added to the bloc’s list of terrorist organizations. But the EU’s foreign policy chief, Josep Borrell, noted that could only happen if a court in an EU country determined the IRGC was guilty of terrorism.

Britain also imposed sanctions on more Iranian individuals and entities on Monday over the country’s “brutal repression” of its people.

The sanctions included an asset freeze on Iranian deputy prosecutor general Ahmad Fazelian, who the British foreign office said was responsible for an unfair judicial system that used the death penalty for political purposes.

Others sanctioned by Britain on Monday include Kiyumars Heidari, commander in chief of Iran’s ground forces; Hossein Nejat, deputy commander of the Islamic Revolutionary Guard Corps (IRGC); and the Basij Resistance Force and its deputy commander, Salar Abnoush.

Iran’s long-strained relations with the West have deteriorated since talks to revive its 2015 nuclear deal deadlocked and after Tehran unleashed the crackdown on protesters last year.

Iran’s ties with the West have also been strained by its support for Russia in Ukraine, where Western states say Moscow has used Iranian drones.