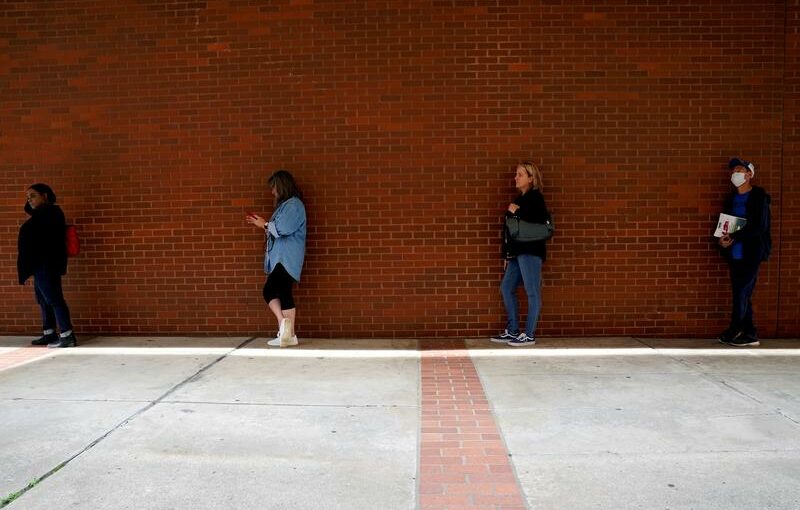 WASHINGTON (Reuters) – The number of Americans filing new claims for unemployment benefits fell to a 16-month low last week as the labor market gains traction, but worker shortages and bottlenecks in the supply chain are frustrating efforts by businesses to ramp up production to meet strong demand for goods and services.

Manufacturing production fell in June, with motor vehicle assembly tumbling amid a relentless global shortage of semiconductor chips, other data showed on Thursday. The imbalance between supply and demand as the economy emerges from the COVID-19 pandemic is stoking inflation, with prices expected to remain high in the months ahead before moderating.

Federal Reserve Chair Jerome Powell told lawmakers on Thursday that he anticipated the shortages and high inflation would abate over time.

“The problem continues to be sourcing the input components and the skilled workers that remain in short supply, but there is evidence that the logjam is beginning to break up,” said Tim Quinlan, a senior economist at Wells Fargo in Charlotte, North Carolina.

Initial claims for state unemployment benefits fell 26,000 to a seasonally adjusted 360,000 for the week ended July 10, the lowest level since the middle of March in 2020, the Labor Department said. Data for the prior week was revised to show 13,000 more applications received than previously reported.

Economists polled by Reuters had forecast 360,000 applications for the latest week. Claims have struggled to make further progress since dropping below 400,000 in late May, even as at least 20 states led by Republican governors have pulled out of federal government-funded unemployment programs.

Unemployed people are required to file claims under the regular state programs to determine eligibility for federal benefits. The early termination of the federal programs followed complaints by businesses that the benefits, including a $300 weekly check, were encouraging unemployed Americans to stay at home. The economy is experiencing a shortage of workers, with a record 9.2 million job openings as of the end of May.

About 9.5 million people are officially unemployed. The disconnect has also been blamed on lack of affordable child care, fears of contracting the coronavirus as well as pandemic-related career changes and retirements.

Evidence is mixed on whether the early termination of federal benefits, which started on June 12 and will run through July 31, is encouraging job seeking. The expanded benefits will lapse on Sept. 6 for the rest of the country.

The number of people continuing to receive benefits after an initial week of aid fell 126,000 to 3.241 million in the week ended July 3. Texas and Georgia accounted for the bulk of the decline in these so-called continuing claims, which are reported with a one-week lag.

“Claims in those two states, where top-off benefits ended June 26, fell to their lowest level since March 2020, suggesting the early end to benefits might be encouraging some people to return to work,” said Nancy Vanden Houten, lead U.S. economist at Oxford Economics in New York.

Florida and South Carolina, which have also terminated federal benefits early, reported big increases in continuing claims. Some states that have not prematurely ended expanded benefits also saw declines in people on the jobless rolls.

At least 13.8 million people were collecting unemployment checks under all programs in late June.

Stocks on Wall Street were trading mostly lower. The dollar rose against a basket of currencies. U.S. Treasury yields fell.

In a separate report on Thursday, the Fed said manufacturing output dipped 0.1% in June after accelerating 0.9% in May. It was pulled down by a 6.6% plunge in production at auto plants. The global chip shortage is forcing automakers to adjust production schedules.

Auto production cuts have boosted demand for used cars and trucks, the major driver of consumer inflation in recent months.

Still, manufacturing, which accounts for 11.9% of the U.S. economy, grew at a 3.7% annualized rate in the second quarter after increasing at a 2.3% pace in the January-March period. Demand is being fueled by COVID-19 vaccinations, low interest rates and nearly $6 trillion in government relief since the pandemic started in the United States in March 2020.

Though vaccinations are boosting spending on travel-related services and dining out among other activities, demand for goods remains robust and inventories are extremely low, which should keep manufacturing supported.

A third report from the New York Fed showed its measure of factory activity in New York state surged in July, with new orders and shipments rising strongly.

While a fourth report from the Philadelphia Fed showed a drop this month in its gauge of manufacturing in the region that covers factories in eastern Pennsylvania, southern New Jersey and Delaware, activity continued to expand at a solid clip.

“Anecdotal guidance suggests that supply issues could start to be resolved later this year and into 2022,” said Veronica Clark, an economist at Citigroup in New York. “As long as indications of demand remain strong, we expect production to remain supported into 2022 as supply issues eventually ease.”

An easing of bottlenecks is expected to relieve some of the inflation pressure. In a fifth report, the Labor Department said import prices rose 1.0% in June after surging 1.4% in May. In the 12 months through June, import prices advanced 11.2% compared to 11.6% in May.

The government reported this week that consumer prices increased by the most in 13 years in June, while producer prices accelerated.

“The U.S. is experiencing cost-push inflation, which historically has proven more temporary than other causes of inflation, primarily demand pull,” said Ryan Sweet, a senior economist at Moody’s Analytics in West Chester, Pennsylvania.