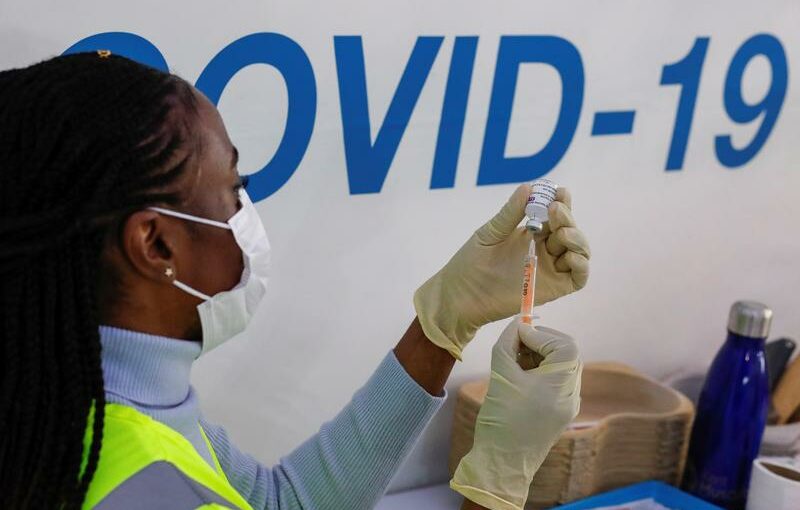 LONDON (Reuters) – Britain’s medicines regulator said there had been five cases of a rare type of blood clot in the brain among 11 million given AstraZeneca’s COVID-19 vaccine but said that it found the benefits of the shot far outweighed any possible risks.

A dose of AstraZeneca vaccine is prepared at COVID-19 vaccination centre in the Odeon Luxe Cinema in Maidstone, Britain February 10, 2021. REUTERS/Andrew Couldridge

Concerns about reports of blood clots, along with low platelet levels, have led to some European countries including Germany to pause the rollout of the shot while the cases are investigated by the European Medicines Agency (EMA), which is set to announce its findings later in the day.

Britain’s Medicines and Healthcare products Regulatory Agency (MHRA) said that use of the vaccine should continue while five reports were investigated, and one official said that the rollout would likely continue even if a link was proved.

“There is no evidence that blood clots in veins is occurring more than would be expected in the absence of vaccination, for either vaccine,” said June Raine, MHRA Chief Executive, referring to AstraZeneca and Pfizer shots.

Raine said there had been a very small number of reports of an extremely rare form of blood clot in the cerebral veins (sinus vein thrombosis, or CSVT) occurring together with lowered platelets soon after vaccination.

“Given the extremely rare rate of occurrence of these CSVT events among the 11 million people vaccinated (with AstraZeneca), and as a link to the vaccine is unproven, the benefits of the vaccine in preventing COVID-19, with its associated risk of hospitalisation and death, continue to outweigh the risks of potential side effects,” she said.

One of the reported cases was fatal, MHRA Vaccine Safety Lead Philip Bryan said, adding that the cases were all among men aged between 19 and 59.

The MHRA said anyone with a headache that lasts for more than four days after vaccination, or bruising beyond the site of vaccination after a few days, should seek medical attention.

The regulator said there was an ongoing review into “five UK reports of a very rare and specific type of blood clot in the cerebral veins (sinus vein thrombosis) occurring together with lowered platelets (thrombocytopenia)”.

Munir Pirmohamed, Chair of the Commission on Human Medicines, in a statement suggested that even if a link between the clots and the vaccine was established, it likely wouldn’t halt Britain’s rollout.

“If we feel that there’s causal link then we may need to update the product information, but overall, I don’t think that would necessitate pause to any kind of vaccination programme,” he told reporters in a briefing.

The EMA is investigating reports of 30 cases of unusual blood disorders out of 5 million people who got the AstraZeneca vaccine in the EU, and is focusing on blood clots in the head.

Stephen Evans, at London School of Hygiene and Tropical Medicine, said that COVID-19 itself was associated with similar symptoms, making causality hard to establish.

“A major problem is discerning whether there is a possibility that this was caused by COVID-19,” Evans told Reuters.

“Exactly these sort of conditions have been seen in patients with COVID-19 prior to the vaccines being available.”