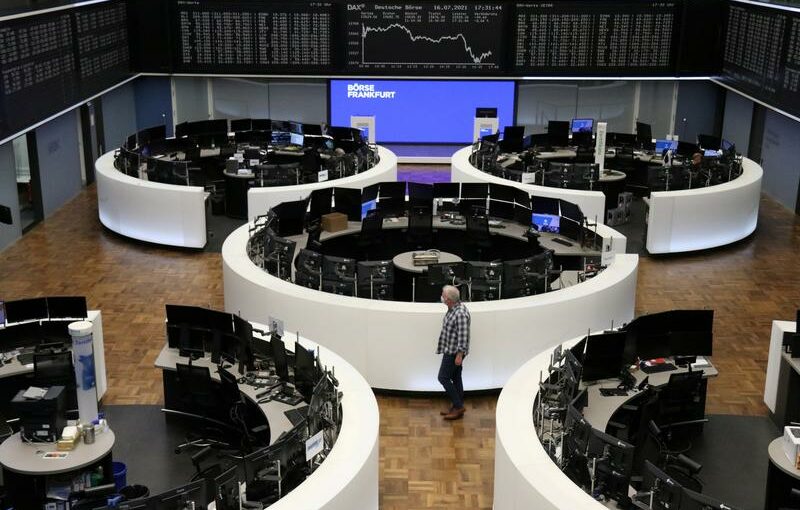 (Reuters) – European shares sank more than 2% on Monday, their worst session in nine months on worries that the fast-spreading Delta coronavirus variant could slow the global economic recovery.

Commodity-linked stocks, banks and travel shares lost more than 3%, with the oil and travel and leisure indices hitting February lows.

Extending losses from last week, the pan-European STOXX 600 index was down 2.3%, with all sectors in the red.

“Investors are extremely worried that… another lockdown could be a month or two round the corner,” said Russ Mould, investment director at AJ Bell. “Covid is spreading fast again and the airlines, restaurants and leisure companies may not get the strong summer trading they’ve long hoped for.”

In Britain, cases rose to 48,161 on Sunday, while in France, a minister said the re-imposition of curfew measures cannot be excluded if infections continue to climb.

“The big concern for the market is whether we (are) going to see a slowdown in the global economic recovery, and this could be the overriding force which results in a bad period for equities in the weeks ahead,” Mould said.

Bank of England interest-rate setter Jonathan Haskel said on Monday monetary stimulus would not be curbed for the foreseeable future. Eyes will be on the European Central Bank meeting this week following its recent strategy update.

With government bond yields on the decline, banks marked their worst session in 10 months, while declining base metal prices hit miners. [MET/L][GVD/EUR]

Oil majors such as BP, Royal Dutch Shell and Total fell between 3.8% and 4.7%, hit by falling crude prices after OPEC+ ministers agreed to increase supply from August. [O/R]

French media company Vivendi hit a four-month low, down 1.5%, after billionaire investor Bill Ackman decided to buy up to 10% of Vivendi’s Universal Music Group through his main hedge fund, rather than a special purpose acquisition company.