Home » Markets » Wall Street awaits Biden infrastructure plan, but it may not be ready for the new taxes 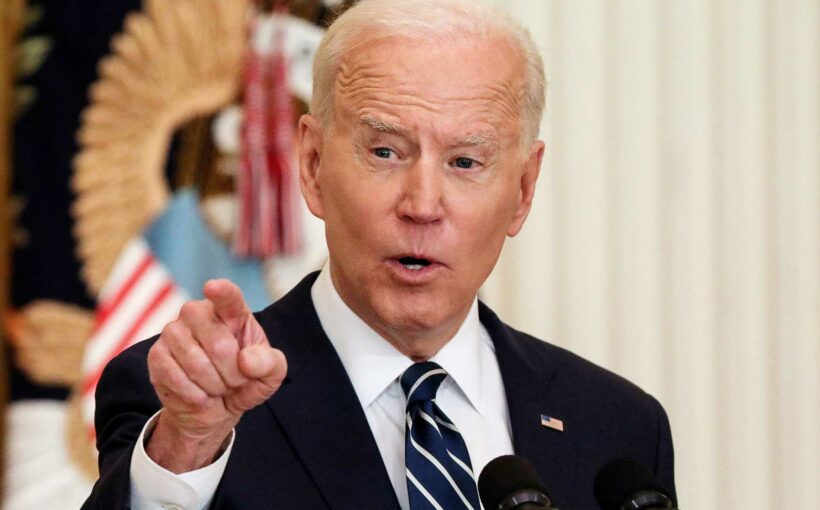 Wall Street is awaiting details of President Joe Biden's infrastructure plan, but it may not like the way Democrats will want to pay for it.

Biden is expected to unveil the first part of his ambitious infrastructure plan in Pittsburgh on Wednesday. The overall plan is expected to include traditional infrastructure funding for roads, railroads and bridges, but also spending to promote a lower carbon future through electric cars, advanced batteries and more efficient buildings.

Political strategists say they also expect to see, at some point, a list of proposed tax increases for individuals and businesses, some reversing the 2017 tax cuts.

The first tax increases are widely expected to roll out next year, but some say there's a chance a capital gains tax increase for the wealthiest Americans could be in the works soon.

"The market is just not ready for this. I've been totally bullish for a year, and now the flags are up," said Dan Clifton, head of policy research at Strategas. Clifton said he does not think all of the proposals will go through, but there will be higher taxes for the wealthiest taxpayers, and businesses will pay more on U.S. and foreign earnings.

The hope is the plan, which spans a decade, would not only boost the economy through infrastructure and green spending, but also provide programs to help families like free community college and universal kindergarten.

"I worry some of these tax increases are going to have to go into effect immediately, not 2022. If you tell investors they have four months of 2021 at a 20% rate and on January 1, 2022, it's going to 28%, investors will realize their gains in the four months before the taxes go higher," Clifton said.

Strategists say that among proposals likely to be adopted are a several percentage point increase in the corporate tax rate, and a hike in taxes on foreign operations. For wealthy individuals, there could be increases in income taxes and capital gains.

Dividends also could be taxed at a new higher rate for the same group. Estate taxes also may be changed.

Private equity and hedge fund partners especially would be hit by potential changes on how capital gains would be taxed for the wealthy. Partners who make profits on personal assets in funds or are paid carried interest are taxed on those earnings at the capital gains rate, or 20% at most.

Biden has proposed closing that loophole by taxing capital gains for couples earning more than $1 million at the ordinary income rate.

"It really is the portion of the tax code that deals with partnership interests," said Ed Mills, Washington policy analyst at Raymond James. The threshold was meant to target the wealthy and not small partnerships. "There's a big difference between that two-person law partnership and a global private equity partner."

Biden has said taxes would not go up for taxpayers making under $400,000 a year.

Clifton said it's possible, after compromise, that the capital gains tax could go to 28% for wealthy individuals and not the expected 39.6% top rate on ordinary income. The top tax rate was at that level before the Republican tax cuts in 2017.

"In effect, married individuals earning above $400,000 that are currently paying either 33% or 37% would be pushed into a 35% or 39.6% bracket (with the top bracket starting much lower than under present law)," notes Andy Laperriere, head of policy at Cornerstone Macro.

For companies, some strategists say there could be a compromise from Biden's proposed 28% tax on corporate profits, and it could end up more like 25%. The corporate tax rate was cut to 21% from 35% in 2017, but Clifton said there were more deductions at the higher rate, and those are not expected to return.

"Our view is the tax increases are probably not really discounted," Laperriere said. He said some details of the higher levies may start to come out. "We're going to get some of that tomorrow. It's not clear how much … We'll see what we get in his speech."

The Biden administration is expected to release a skinny budget later this week, but the full scope of its tax plan may still be weeks away.

"If we go from a 21% to 25% corporate tax rate, I don't think Wall Street is going to complain too much about that," said Sam Stovall, chief investment strategist at CFRA. He said it could be problematic if Democrats were to tax dividends as ordinary income, which is so far viewed as unlikely for the majority of investors.

"I think any kind of change in the [corporate] tax law will affect earnings. That can be computed to the bottom line, but I guess the question is will that be enough of a change to alter an investor's decision to buy a particular stock or buy stocks in general." he said.

Stovall said 2022 earnings forecasts have been rising, and that could help ease the hit from higher taxes.

"It might give investors pause, but since the second half of the year is expected to post pretty strong growth, investors may be wondering if they are underestimating growth," he said.

Mills said, however, that the Biden administration also could push for a minimum tax, which would guarantee that some profitable companies that pay extremely low taxes would pay at least 15%. Amazon, for one, paid a tax rate in the single digits.

The tech sector is likely to be hit hardest by the tax increase because of foreign operations, he said.

"In 2017, we allowed companies to repatriate foreign cash back to the United States, and companies have been bringing their cash home," Clifton said. But he said there was a different tax instituted on foreign operations.

"It creates a formula for how much intellectual property you have overseas and puts a tax on that," he said. The tax is currently 10%, and Biden has proposed raising it to 21%, though Clifton said there would probably be a compromise at about 15%.

Clifton said there is a tax increase for companies that Democrats could reverse. Under the 2017 tax law, research and development costs would have to be amortized over five years, starting in 2022. That could be eliminated and companies could continue to write off those expenses.

All told, Clifton expects the corporate tax bill to rise by $120 billion in 2022 if those changes are made, effective Jan. 1.

Transports should also gain. "Utilities are going to get hit with the corporate tax rate. They're also going to be hit with mandates on the grid," he said.

Some companies could benefit from that, like Nextera, he said.

He said companies that stand to gain include industrial companies like Johnson Controls, Eaton or Carrier, or companies in building materials like Lennox.

Clifton said the tax increases could be phased in, or there's a slight chance they could be rolled out earlier, effective when the legislation is approved. That would mean companies would pay a higher tax rate for part of this year, though strategists see that as unlikely.

Democrats are expected to slice the infrastructure plan in two, bringing forward legislation with traditional infrastructure spending that could appeal to Republicans.

In several weeks, another aspect of the plan is expected to be unveiled, and that likely would include health care and child care reforms as well as the tax increases. The latter would have to be approved through reconciliation, meaning it could be passed by just a majority in the Senate, as opposed to 60 votes.

"I think you have to anticipate that there will be tax increases if there is an infrastructure bill. At least a portion of that is going to be paid for," Mills said. "The most likely corporate tax increase is a 28% rate followed by significant changes to the international code."

"When you look at the international code, that was probably some of the larger changes under the Trump administration …There's less of a pain threshold for members of Congress when the taxes are on international operations versus on constituents," he added.

Regardless of how it is proposed, Biden's plan to "Build Back Better" is not expected to move as quickly as the $1.9 trillion Covid relief plan, approved last month and supported only by Democrats.

Clifton said there's also a push by some Congress membeers to roll back the cap on the SALT tax deduction, which limited the amount of state and local taxes that could be deducted at $10,000. The limit was imposed in the 2017 tax legislation and hit taxpayers in high tax states like California, New York and New Jersey.

Sen. Bernie Sanders, I-Vt. last week introduced a bill to return the corporate tax rate to the pre-2017 level of 35%.

Sanders bill also included a progressive estate tax, which would start with a tax of 45% on estates valued between $3.5 million and $10 million. It would be as high as 65% for estates valued above $1 billion.

The tax overhaul is also expected to unleash opposition from advocacy groups across the political spectrum.

"I think moderate members from what I've heard are a bit squeamish about how bit the package is," he added.

Pugliese said more progressive members are concerned that they didn't get the minimum wage raised to $15 an hour in the stimulus package.