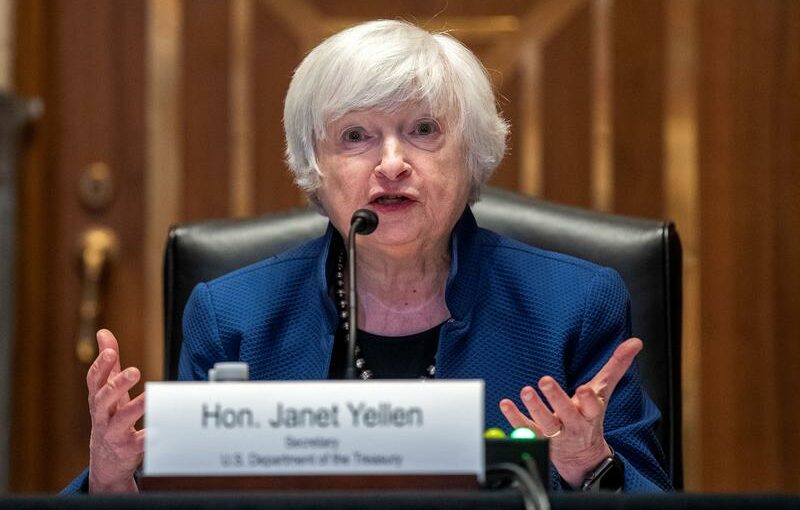 Yellen, testifying at a Senate subcommittee on the Biden administration’s budget proposal, said the economy has been on a “bumpy path” during its reopening after months of restrictions to combat the spread of COVID-19.

Asked by Republican Senator John Kennedy if she thought inflation would keep increasing at the 5% year-over-year rate seen last month, Yellen said she thought it would be closer to 2% by late this year or early 2022.

She also said most measures of inflation expectations beyond the next year show it returning closer to that 2% level, which is the level targeted by the Federal Reserve.

Yellen, echoing other policymakers including Fed Chair Jerome Powell, laid much of the blame for the recent surge in price pressures on supply bottlenecks and shortages that arose in spring as the economy recovers from the COVID-19 shutdowns that threw it into recession last year.

She said she expects those issues to resolve themselves in the months ahead and for longer-running forces that have kept inflation at bay for more than a decade to reassert themselves and guide inflation lower.

Yellen, a former Fed chair, was also pressed by Kennedy on the recent change in Fed policymakers’ outlook for rate increases. Projections released alongside their policy decision last week showed members’ median expectation for a first interest rate hike moved into 2023 from 2024 back in March.

“The Federal Reserve met recently and they said: ‘Look, we know we told you this, but things have changed and we’re now telling you that we’re likely to have to raise rates sooner and faster than we originally told you,’” Kennedy said. “Why do you think they did that? Because they’re concerned about inflation, aren’t they?”

“That is not what they did,” Yellen answered. “Several individuals wrote down in their own individual forecasts which were published that they saw it appropriate to raise rates sooner than previously (thought).”

Yellen was visibly uncomfortable being pressed on monetary policy issues, which are typically left to the Fed without interference from Treasury.

“I don’t really want to comment on the Fed, but I would simply say that is not an announcement that they made,” she said.