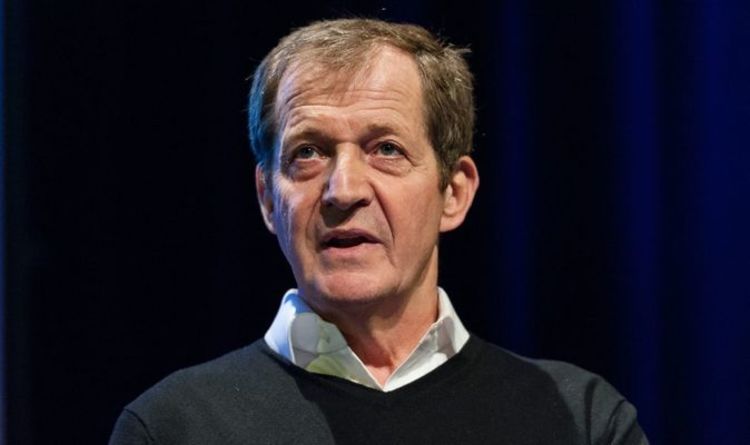 BP is making plans to ration fuel deliveries of petrol and diesel to forecourts across the UK to ensure supplies do not run out. The British oil and gas giant met with the Government and raised concerns over an inability to transport fuel from refineries to its forecourts as the global shortage of HGV drivers continues. BP, which has around 1,200 branded petrol stations spread across hundreds of miles in Britain, is temporarily closing some as a result of the escalating problem.

Since the shortage of HGV drivers and supply issues first came to light several weeks ago, Rejoiners have jumped at the chance to blame this on Brexit.

Now Alastair Campbell, the former Labour spin doctor under Tony Blair, has sarcastically tried pin the blame on the UK’s departure from the EU for the current problems.

He wrote: “Nothing to do with Brexit I am assuming that my local Shell garage has no unleaded petrol.

“Must be those global supply chain issues that seem to keep picking on Britain.”

Earlier, fellow Rejoiner Femi Oluwole sarcastically mocked the escalating petrol crisis throughout the UK as “another huge win for Brexit”.

He retweeted an article about the latest issues, and wrote: “Another HUGE WIN for Brexit!!”

In a separate tweet, the political activist and co-founder of the pro-European Union advocacy group Our Future Our Choice dismissed claims Brexit was not the cause of the problems, insisting it is “the main reason we can’t fix” the current supply issues.

Mr Oluwole wrote: “Remember, the top ask from the Road Haulage Association to fix these shortages is being blocked by Brexit.

“So I don’t care whether you believe that Brexit caused this.

“Brexit is the main reason we can’t fix it.”

But the comments from the Rejoiner were quickly torn apart by several people on the popular social media platform.

Twitter user @Ianto1960 wrote: “So why is the rest of Europe also suffering the same issue then Femi? Is that being blamed on Brexit as well?”

@TartanTory commented: “Brexit isn’t blocking anything Femi. The decision to or not to grant temporary visas is the issue.

“But even if temporary visas are granted there is a driver shortage in Europe so we would need to look further afield.”

@djmurphykavos added: “All of Europe has a shortage of drivers. They get old and have to have medicals every five years after 45.

“Most fail and have their HGV taken away.

“To drive a petrol tanker you need more than just a licence to drive a truck. You need to have an ADR ticket.

BP said in a statement on Thursday: “We are experiencing fuel supply issues at some of our retail sites in the UK and unfortunately have therefore seen a handful of sites temporarily close due to a lack of both unleaded and diesel grades.

“These have been caused by delays in the supply chain, which has been impacted by industry-wide driver shortages across the UK, and we are working hard to address this issue.

“We continue to work with our haulier supplier to minimise disruption and to ensure efficient and effective deliveries to serve our customers. We apologise for any inconvenience caused.”

ExxonMobil’s Esso also said a small number of its 200 Tesco Alliance retail sites throughout the UK had been hit by the latest problem.

It said in a statement: “We are working closely with all parties in our distribution network to optimise supplies and minimise any inconvenience to customers.”

The Petrol Retailers Association (PRA), which represents independent forecourts that account for nearly two-thirds of Britain’s petrol stations, said the issues appeared to be confined to London and southeast England, adding they also appeared to be a short-term problem.

The PRA’s Gordon Balmer said: “According to latest BEIS (business department) data, fuel demand is still only at 92 percent of pre-pandemic levels so we believe there should be ample stock available at refineries and delivery terminals throughout the UK.”