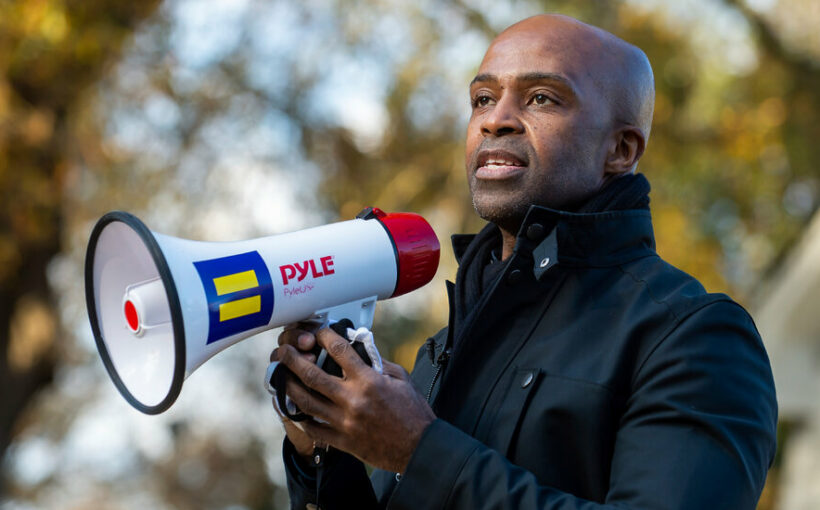 Alphonso David, the president of the Human Rights Campaign, the nation’s largest L.G.B.T.Q. advocacy organization, was ousted by the group’s board on Monday night over a report revealing that he had advised former Gov. Andrew M. Cuomo on how to handle sex harassment allegations.

Mr. David, the group’s first Black president, was terminated “for cause” in separate votes by the boards of the Human Rights Campaign and its affiliated foundation after the two boards held a joint meeting. Beyond two abstentions from the foundation board, the votes were unanimous.

Mr. David’s removal is the latest fallout from the report by Letitia James, the New York State attorney general, describing allegations of sexual harassment by Mr. Cuomo, and efforts by his aides to retaliate against the former governor’s accusers. Mr. Cuomo resigned in August after the report outlined 11 allegations and described a toxic work environment.

Mr. David, who had worked as a lawyer in Mr. Cuomo’s office, was identified in the James report as involved in efforts to undermine Mr. Cuomo’s first accuser, Lindsey Boylan. Despite no longer working there, Mr. David had a memo in his possession containing confidential information about Ms. Boylan’s employment history. He shared the memo with one of Mr. Cuomo’s communications advisers who were hoping to release details to reporters. Mr. David has maintained that he had an obligation as a lawyer to do so.

Mr. David also suggested edits to a letter intended to malign Ms. Boylan that was being circulated among Mr. Cuomo and his aides, and said that he would collect signatures for it from former aides. He declined to sign it himself, however, and he later said that he did not know the extent of the allegations against Mr. Cuomo. He called for Mr. Cuomo’s resignation after the report came out.

A person familiar with the deliberations among the board of the Human Rights Campaign said that Mr. David never told the organization that he was helping to advise Mr. Cuomo when the accusations came to light. The person said Mr. David did not consult the group’s counsel, or tell them that he was going to be interviewed by Ms. James’s office.

In a statement, the co-chairs of the board, Morgan Cox and Jodie Patterson, said they had decided to end Mr. David’s role “effective immediately, for violations of his contract with the Human Rights Campaign.”

“This is a painful moment in our movement,” they wrote. “While the board’s decision is not the outcome we had ever envisioned or hoped for in terms of Mr. David’s tenure with H.R.C., his actions have put us in an untenable position by violating H.R.C.’s core values, policies and mission.”

The statement also touched on a public quarrel that had unfolded between Mr. David and the board over the weekend, after Mr. David said that he had been told that a review of his actions had been completed without any finding of wrongdoing.

“Yesterday and today, Mr. David released a statement that included significant untruths about the investigation and his status with the organization,” Mr. Cox and Ms. Patterson said.

The review was conducted by members of the H.R.C. executive committee. They determined that Mr. David had a conflict of interest in advising Mr. Cuomo’s office, and that his efforts created reputational damage to the organization. Joni Madison, the chief operating officer for the group, will become the interim president while a search takes place for Mr. David’s successor.

Mr. David is not the only liberal ally of Mr. Cuomo to become ensnared in the James report. Recently, the prominent lawyer Roberta A. Kaplan, a co-founder of the Time’s Up Legal Defense Fund, whose mission is to fight for sexual harassment victims, stepped down after the James report revealed that she had discussed with Tina Tchen, the chief executive of Time’s Up, a letter about Ms. Boylan being drafted by Mr. Cuomo’s aides. Although they contested the accusation that they had counseled Mr. Cuomo’s team on smearing a victim, both Ms. Kaplan and Ms. Tchen recently stepped down from their roles.

Mr. David had been a Cuomo aide for nine years when the Human Rights Campaign hired him in June 2019. In announcing Mr. David’s appointment, the group highlighted his work with the former governor on major advances in L.G.B.T.Q. rights, including marriage equality and a ban on conversion therapy.

The divisions between Mr. David’s supporters and those who believed he crossed a line by helping Mr. Cuomo combat allegations of sexual harassment became even more apparent on Sunday, after Mr. David released his statement on Twitter. Along with saying that the review had been completed without any finding of wrongdoing, he said the co-chairs of the board “have now asked me to consider resigning, not because of any wrongdoing, but because they feel the incident has been a ‘distraction’ for the organization.”

He said that their plan had been to “resolve the matter quietly during this holiday weekend,” adding: “I have the support of too many of our employees, board members and stakeholders to walk away quietly into the night. I am not resigning.”

“The idea that this is a distraction is simply not right,” Mr. David said. “I have not been distracted, nor have my H.R.C. colleagues who are fighting for human rights. The distraction would be calling for my resignation without providing the results of the review.”

Officials with the Human Rights Campaign then released a statement to their own staff saying that the review was not done and that Mr. David was mischaracterizing what had been relayed to him about the findings.

“We were very surprised and disappointed by the inaccuracies in his portrayal of events,” the two board chairs told their staff in an email. “That investigation will soon be completed,” the statement said, and the organization “will then have more to say.” The board chairs initially supported Mr. David remaining in his role, but when some staff members questioned whether he should leave, they hired the law firm Sidley Austin to conduct a review of his conduct.

The person familiar with the board’s decision said that there was no written report from that review, and that there was never going to be one. Rather, there were oral presentations to the board. Mr. David is said to have provided names to the board for people to be interviewed during the investigation, in addition to the 10 hours he spent being interviewed.

In a separate email to staff sent on Monday night after the vote, the co-chairs of the board further addressed Mr. David’s statements a day earlier. “At no time did we — the board chairs — tell him that there was no indication of wrongdoing, nor did we tell him we wanted this handled ‘quietly,’” they said.

“This decision was made by the full boards of both H.R.C. and H.R.C. Foundation because of Alphonso’s own actions in support of Governor Cuomo,” they added. “He alone bears responsibility for what he did and the consequences.”