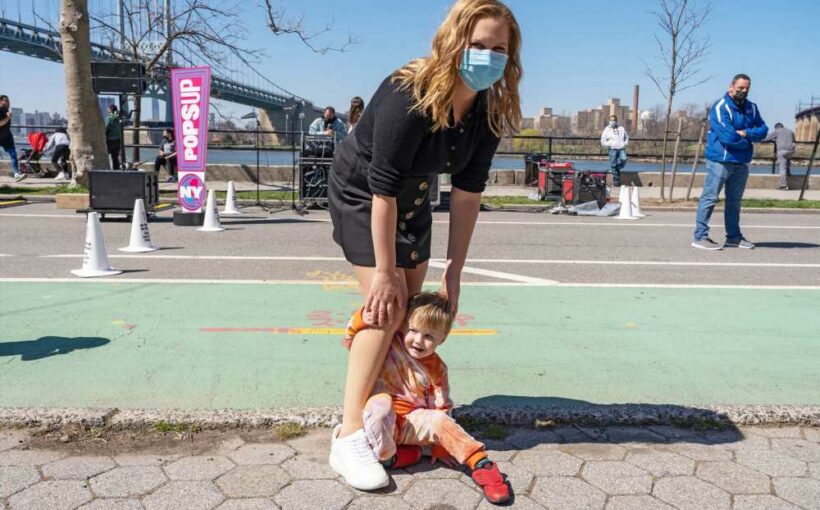 Amy Schumer is urging other Americans to support the For the People Act — and she's more than happy to use her 22-month-old son to "bribe" voters to educate themselves on the measure in a playful new PSA.

"Hello. I need your help. Don't turn off the video yet," the Trainwreck star, 39, says with a laugh at the beginning of the clip, exclusively premiered above. "It's me, Amy Schumer. At the end of the video, I'm going to show you my son, my little baby. So that is bribery and that is because of how important this issue is."

As Schumer goes on to explain, lawmakers are currently attempting to pass "250 laws in almost all 50 states to try and make it harder to vote."

Many of these measures are backed by the argument they reduce fraud and ensure election integrity, though experts agree there is not widespread election fraud — despite Donald Trump's unsuccessful efforts to overturn his November loss.

"This is true voter suppression," Schumer says of the raft of measures in states such as Arizona, Florida and Texas. "But thank god there's something called the For the People Act." Introduced in the House in January, the legislation is now being debated in the Senate, where it faces an uncertain path to passage.

If signed into law, it would enact uniform election laws across the country and enshrine a number of voting access changes favored by Democrats, such as making Election Day a holiday and instituting automatic voter registration, will reforming political financing and ethics rules.

Republicans opposing the measure say it increases federal oversight of locally run elections and insist it would unfairly favor Democrats. Not so, Schumer says in her PSA.

"The short version is that the For the People Act is awesome — unless you hate democracy, and I know that you don't, you love democracy, I love you," she says.

Saying she needs viewers' help, Schumer adds that the act won't pass unless Americans "make a bunch of noise," directing those watching to visit represent.us/wtf and share the page with others.

"It's not a partisan thing. It's not about anything except for how to protect people's rights to vote," Schumer says. "This is how we stick it political corruption and we get Congress unstuck."

Following her message, as promised, Schumer picks up her camera and takes viewers into an adjacent room to see her son, Gene David.

"Okay now, I'm going to take you to go see my little guy, because I promised. And this is fully not cool and if you judge me for this that's fine," she jokes, as Gene can be seen playing and talking to his mom.

"Do you like the For the People Act?" Schumer asks.

"Oh, good," Schumer says, again training the camera on herself. "You heard it here." Earlier this month, Schumer shared on Instagram that she was able to visit her dad, Gordon, for the first time in a year due to the COVID-19 pandemic, and she brought along her son for the happy reunion.

The post included footage from other highlights of her "big day," including time with her mother, Sandra, and a park visit with Gene and husband Chris Fischer.

"First real visit with my dad in a year," the comedian wrote with the post, adding, "Learned my mom can play the shofar and we started dressing Gene like the guy at the party with drugs. How was your day?"

On Tuesday, Schumer shared a photo of herself alongside her father, who was in a hospital bed. (She has been open about her father's health struggles in the past, previously telling Barbara Walters in 2015 that he has lived with MS since she was 12.)

She jokingly captioned the photo: "I have terrible news. My father was in an unfortunate magician sawing accident. He has a good spirit through it all and we're still hoping the magician will turn back up."