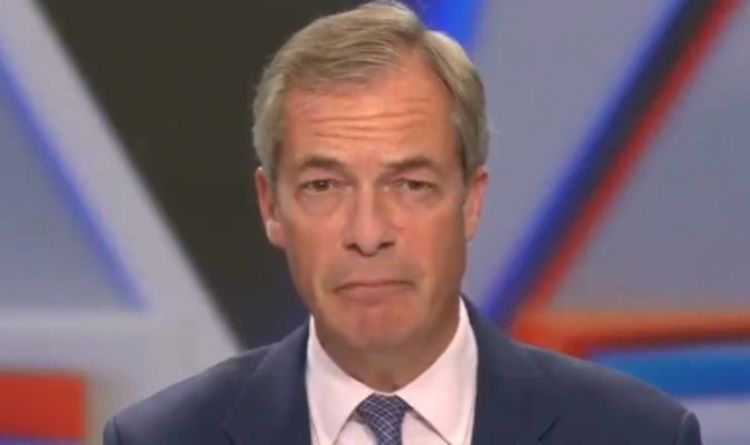 Nigel Farage discussed Sajid Javid’s press conference where he revealed the UK would be purchasing antivirals to help with the coronavirus pandemic and urged the public to follow measures like mask-wearing and social distancing. Mr Javid also wanted the public to go for their booster shots to avoid another lockdown but Mr Farage attacked the Health Secretary for threatening the public’s freedoms. The former Brexit Party leader argued it was an “oxymoron” for Mr Javid to demand people to follow certain rules or the Government will take freedoms away.

Speaking on GB News, Mr Farage looked at Mr Javid’s press conference earlier that evening and gave his assessment of the events.

Mr Javid revealed the Government would be purchasing antivirals to help keep case numbers down after figures surged in recent weeks.

NHS chiefs have called for a “Plan B” measure which would include mandatory face coverings, social distancing and other measures to prevent COVID-19 from spreading.

But Mr Javid played down the concerns, arguing it would not be needed if people went for their booster shots and followed some restrictive measures.

Mr Farage was not impressed and said: “Plan B is not being implemented at this point but he did say during that press conference that it was very important for people to get their booster shots to keep your freedoms.

“So it’s a bit of an oxymoron really, do exactly as we tell you or we might take your freedoms away.

Later on in his show, Mr Farage continued to attack the notion of further lockdowns and wanted people to be able to enjoy their freedoms.

Speaking during a coronavirus press conference, Mr Javid revealed the UK would be purchasing two antivirals to tackle the surge in cases.

But as the Health Secretary concluded his speech, he told the public the different ways they could try to keep the case rate down.

He explained: “There are many more things we can do to help contain the spread of this virus.

“Like meeting outdoors where possible and if you can only meet indoors, letting in fresh air.

“Especially if you are coming into contact with people you don’t normally meet and making and taking rapid tests as part of your routine.”

Mr Javid quickly earned the ire of the public after many pointed out he and his Conservative colleagues did not wear masks in the House of Commons.

Mr Javid has been attacked for the hypocrisy before and told the public MPs did not need to wear masks because they were not strangers.

The Health Secretary’s televised briefing came the day after MPs approved the renewal of emergency coronavirus powers for a further six months, giving the Government the power to reimpose certain public health restrictions.

The figures from the latest 24 hour period show a further 179 people have died within 28 days of testing positive for COVID-19, bringing the UK total to 139,031.