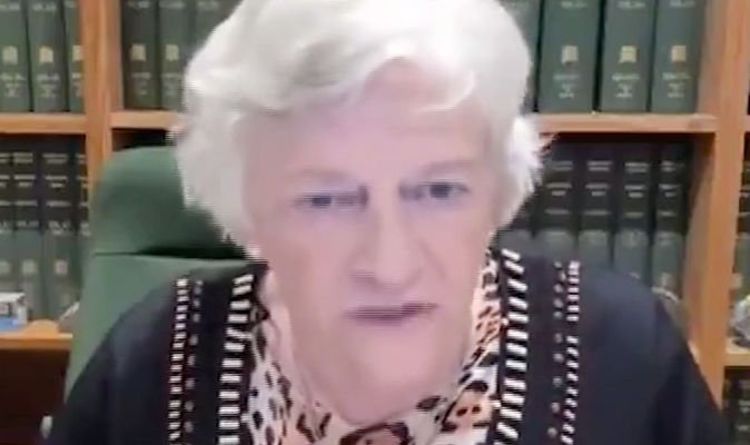 The former Brexit Party MEP insisted the delays and disruption are “yet another example of mismanagement” following from the coronavirus lockdowns. Ms Widdecombe clinically dismissed suggestions Britain’s withdrawal from the European Union was the root cause of the issue as she noted the shortage of HGV drivers to bring goods into the UK came from the suspension of drivers’ tests. Speaking to GB News, the Brexiteer politician said: “You cannot put the absence of food on the shelves down solely to Brexit.

“Let me just give you the facts, a very simple fact of life. One of the reasons that we haven’t got stuff on the shelves it’s because it is not being delivered.

Ms Widdecombe added: “It’s very easy to be wise after the event but I think somebody might’ve worked out in Whitehall that if you were going to simply just stop all the tests throughout all the lockdowns, you were going to end up with a vast queue and fewer truck drivers than you’d need.”

The British haulage industry has claimed Brexit resulted in hundreds of drivers relocating to the European Union, leaving the UK to grapple with a severe shortage.

Representatives of the sector have urged the British Government to review the post-Brexit visa system to facilitate the arrival of labourers from the continent to help restore the smooth flow of goods.

The body’s general manager, Alex Veitch, said he was disappointed by the Government’s decision as it could take until early next year to work through a backlog of driving tests that had built up during the COVID-19 pandemic.

Brexit 'not to blame' for supply crisis says Andrew Bridgen

“Logistics UK is frustrated with the Government’s decision to reject the logistics industry’s call for temporary visas to be made available for EU heavy goods vehicle drivers as a short-term solution while new domestic drivers are recruited, trained and tested.”

Since January, most EU citizens planning to work in Britain need visas which are typically only available for higher-paid jobs than those in the logistics and hospitality sectors.

On Saturday, Business Secretary Kwasi Kwarteng was reported to have rebuffed the demand in a letter to the members of the industry.

DON’T MISS:
British expats watch out! EU rules see Spain drivers’ costs skyrocket [ANALYSIS]
State pension dismay as 500,000 miss out on boost [WARNING]
Countries that will pay you to move there – up to £37,000 [INSIGHT]

Mr Kwarteng allegedly urged the hauling companies to invest in British drivers to ease the pressure of the shortage.

A review of the shortage occupation list, which gives employers more flexibility to hire overseas recruits, could be brought forward to tackle an estimated shortfall of 100,000 drivers, the newspaper said, citing an unnamed government source.