Home » Politics » ‘Back pensioners or leave NOW!’ Boris given firm ultimatum as voters turn on PM 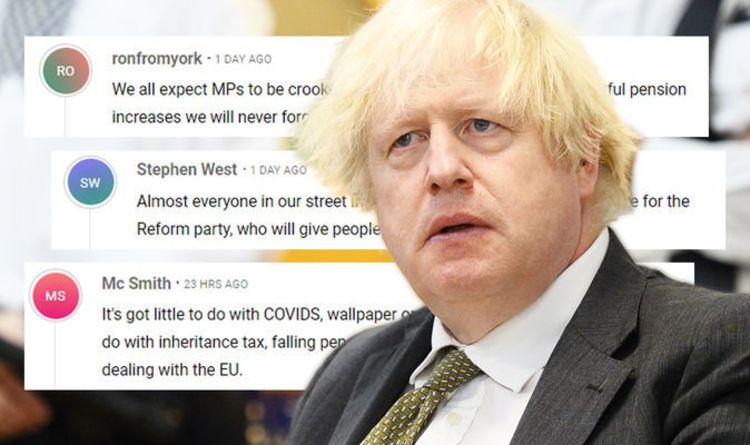 State pension: Expert on difference between ‘old’ and ‘new’

Results of a recent poll found older generations and those living in more rural area – which would traditionally be expected to favour the Tory party – are more likely to be impacted by recent lockdown party rumours and lobbying scandals.

The poll found the Labour Party would do well in an election, and came out six points ahead of the Conservatives at 41 percent, with the Tories trailing behind at 35 percent.

This equates to a loss of 111 Conservative seats at 255, with a number of high-profile Tory Cabinet ministers projected to lose their grip on their own seats.

Now, following the damning poll, the Prime Minister has been urged to back pensioners or risk losing the next general election in 2024, if not sooner.

One Express.co.uk reader, known as TrevorAmmanford, commented: “Time to do a massive U-turn Boris and ditch anti-pensioner, anti-motorist, ideology and get back on your manifesto track.

Ron from York also said: “We all expect MPs to be crooked but robbing pensioners of their rightful pension increases we will never forget.

[email protected] added: “It’s very little to do with drinkies at No10 or covid, it’s all about broken promises to pensioners and Northern railways not to mention that the North overwhelmingly voted leave and yet that’s still not being fully delivered.

“Those red wall seats are not going to be held with policies like those.”

Another reader, ycjarmn27, said: “Not just the North – Everybody I know would never trust him.

“Time for UKIP and Reform to join forces.

“I did not vote for the Green Party!

DON’T MISS
Thousands of state pensioners could be owed up to £60,000 [INSIGHT]
NI increase will not last long: Pensioners to pay the shortfall [REVEAL]
Don’t suffer in silence:’ Britons missing out on £15billion [COMMENT]

“And with Carrie Johnson as Prime Minister, that is what we have got.”

Stephen West said: “Almost everyone in our street in Bagshot, Surrey, are now going to vote for the Reform party, who will give people their freedom.”

A sixth reader, Mc Smith, commented: “It’s got little to do with COVIDS, wallpaper or Christmas Parties last year.

“It is to do with inheritance tax, falling pensions, rising prices and total incompetence in dealing with the EU.”

Number of pensioners affected by increase

London Town added: “Get Brexit done or you will lose the next General Election.”

The poll analysis showed that the Prime Minister himself would lose his seat of Uxbridge and South Ruislip.

The poll, sampling 10,000 people, was carried out by campaign group 38 Degrees, Survation and Professor Christopher Hanretty of Royal Holloway.