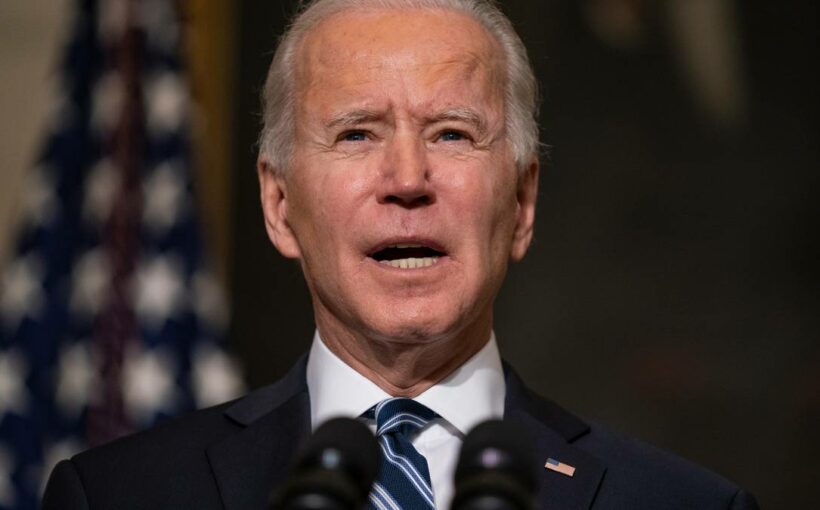 Ioane Teitiota and his wife fought for years to stay in New Zealand as refugees, arguing that rising sea levels caused by climate change threaten the very existence of the tiny Pacific island nation they fled, one of the lowest-lying countries on Earth.

While New Zealand’s courts didn’t dispute high tides pose a risk to Kiribati, about halfway between Hawaii and Australia, laws dealing with refugees didn’t address the danger so the government deported them.

No nation offers asylum or other legal protections to people displaced specifically because of climate change. President Joe Biden’s administration is studying the idea, and climate migration is expected to be discussed at his first climate summit, held virtually Thursday and Friday.

The day the summit starts, Democratic Senator Edward Markey of Massachusetts plans to reintroduce legislation to address the lack of protections for those who don’t fit the narrow definition of “refugees” under international law. It failed in 2019.

“We have a greater chance now than ever before to get this done,” Markey said in a statement to The Associated Press, citing Biden’s climate diplomacy and greater awareness of the problem.

The idea still faces monumental challenges, including how to define a climate refugee when natural disasters, drought and violence are often intertwined in regions people are fleeing, such as Central America.

If the US defined a climate refugee, it could mark a major shift in global refugee policy.

Biden has ordered national security adviser Jake Sullivan to see how to identify and resettle people displaced directly or indirectly by climate change. A report is due in August.

It makes sense for the United States to lead the way, being a principal producer of greenhouse gases, advocates say.

“No nation in the world has taken the leadership to address this reality, which we face today,” said Krish Vignarajah, head of Lutheran Immigration and Refugee Service. “It’s not an issue that we can punt to 20, 30 years from now. Our hope is the US can take strong action that will produce a domino effect on other nations.”

The United Nations says there may be as many as 200 million climate-displaced people worldwide by 2050.

A World Meteorological Organisation report released Monday showed it’s already happening, with an average of 23 million climate refugees a year since 2010 and nearly 10 million recorded in the first six months of last year, especially in Asia and East Africa. Most moved within their own country.

The 1951 Convention on Refugees defines “refugee” as a person who has crossed an international border “owing to well-founded fear of being persecuted for reasons of race, religion, nationality, membership of a particular social group or political opinion”.

Some argue that’s outdated, but few expect changes to the international accord to account for those fleeing rising sea levels, drought or other effects of climate change.
The US may define the displaced as climate migrants instead of refugees and offer them humanitarian visas or other protections.

Biden ordered the idea to be studied after a landmark ruling last year from the UN Human Rights Committee on a complaint Teitiota filed against New Zealand.

Teitiota argued his 2015 deportation violated his right to life. He said saltwater from rising seas destroyed land and contaminated the water supply on the island of Tarawa in Kiribati. Scientists say the impoverished string of 33 atolls with about 103,000 people is among the nations most vulnerable to climate change.

The committee said Teitiota was not in imminent danger at the time of his asylum claim, rejecting his case. But it said it may be unlawful for governments to send people back to countries where the effects of climate change expose them to life-threatening risks — from hurricanes to land degradation.

Even so, identifying climate refugees is not easy, especially in regions rife with violence. In Central America, for example, thousands initially leave their villages because of crop failure from drought or flooding, often end up in cities where they become victims of gangs and ultimately flee their countries.

“It’s a threat multiplier, and so creating a status or category would have to address this complexity rather than to ignore it or to seek ‘pure’ climate refugees,” said Caroline Zickgraf, who studies how climate change affects migration at Belgium’s University of Liège. “Does someone have to prove they were displaced by climate change? That’s an extraordinary, if not impossible, thing to ask of someone.”

Carlos Enrique Linga traveled to the US border with his 5-year-old daughter after rains from back-to-back hurricanes caused landslides and flooding that destroyed more than 60,000 houses in Guatemala alone, including Linga’s farm and home.

He said he took the dangerous trip north because he needed to feed and clothe his children, including 2-year-old twins who stayed behind with his wife.

“To come here, we had to sell whatever harvest we had” to pay a smuggler, said Linga, who stayed at a Texas shelter last month after US immigration authorities released him and his daughter.

He hoped to find work in Tennessee, where a friend lives, and send money back to Guatemala.

Global warming is shifting the migrant population from men seeking economic opportunities to families uprooted by hunger, according to Duke University and University of Virginia researchers studying migration out of Central America.

Researchers reviewing data for about 320,000 Hondurans apprehended at the US-Mexico border from 2012 to 2019 found they were largely from violent, agricultural regions also experiencing their lowest rainfall in 20 years.

According to the study released in March, even when homicide rates in the regions dipped, if the drought worsened that year, apprehensions of families from there jumped at the US border.

Climate change is a driving force, but there’s little political will to help climate migrants, said David Leblang, a professor of politics and policy at the University of Virginia who co-wrote the study.

“As a political scientist, I would say the chances of this happening right now are close to zero,” he said.

Some fear political pressure may lead Biden to back off after the number of people stopped by the Border Patrol last month hit a 20-year high.

He faced similar criticism Friday for expanding refugee eligibility but not lifting his predecessor’s record-low admissions cap of 15,000. Hours later, the White House said Biden would raise it by May 15, without saying how much.

Climate migrants should be treated separately from those resettled under the 41-year-old US refugee programme, experts say, to not take spots from traditional refugees.

In New Zealand, a new government in 2017 tried offering humanitarian visas to Pacific Islanders affected by climate change, aiming to let in about 100 people a year.

New Zealand Climate Change Minister James Shaw said the government is focusing on reducing emissions so people are not displaced.

“Right now, Pacific nations want us to help safeguard their future by focusing on mitigating climate change and supporting them to adapt,” he said. “And so that’s what we’re doing.” – AP