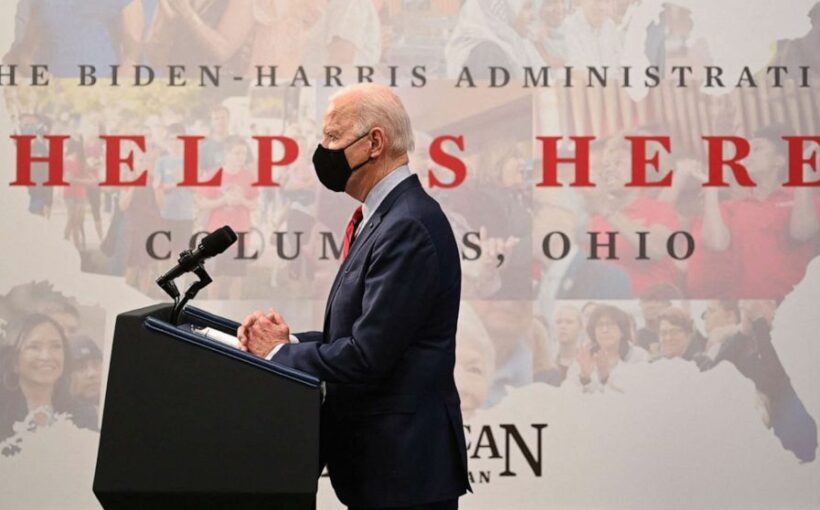 Several Republican governors bucked President Joe Biden’s plea to keep masking mandates in place, even as his administration works to increase vaccination rates to stay ahead of what would be a fourth surge of the coronavirus in the U.S.

“I’m reiterating my call for every governor, mayor and local leader to maintain and reinstate the mask mandate. Please,” Biden said Monday. “This is not politics. Reinstate the mandate if you let it down. And businesses should require masks as well. The failure to take this virus seriously — precisely what got us in this mess in the first place — risks more cases and more … deaths.”

Biden’s call for the American people to continue using masks to stop COVID from surging is nothing new. He has made the plea in nearly all of his remarks on the virus as president, warning that the country is not yet out the woods even as progress is made on vaccinations.

Also on Monday, he announced at least 90% of Americans would be eligible to receive a COVID-19 vaccine by April 19, and 90% of the population would have a vaccination site within 5 miles of their homes.

But the rollback on restrictions at the state level highlights the competing challenge Biden faces on the pandemic: touting positive signs that hope is on the horizon, while also keeping a country fatigued of COVID-19 regulations and restrictions compliant.

“Lifting all of these restrictions, telling people not to wear masks, gathering in large crowds, that’s the equivalent of playing with fire.”

Despite the administration’s dire warnings, Republican leaders moved forward with plans to do away with statewide mandates on masking.

Alabama Gov. Kay Ivey, who last previously extended her state’s mask mandate through the end of March, made clear she has no intention of issuing another extension.

“As Gov. Ivey has previously stated, Alabama’s mask mandate ends April 9. We have made progress, and we are moving towards personal responsibility and common sense, not endless government mandates,” Ivey spokeswoman Gina Maiola said in a statement to the Associated Press.

“This does not mean that the use of the mask will cease,” Hutchinson argued, adding that “common sense should govern” mask usage and private businesses’ decisions on masks should still be respected.

In her press briefing Tuesday, White House press secretary Jen Psaki sidestepped questions about the impact Biden’s message was having, arguing that local leaders and businesses could take action even if governors refused to do so.

“It’s a tough message, (but) important for people to hear that we’re still in war with this virus, and people need to still be vigilant in order to return to normal,” Psaki said.

The Centers for Disease Control and Prevention is now seeing an increase in the number of new COVID-19 cases and people hospitalized with the disease, according to CDC Director Dr. Rochelle Walensky, caused by increased travel in recent weeks, lifting restrictions and more relaxed behavior.

The seven-day average of cases has seen a 10% increase over the previous period and hospitalizations and deaths also have increased.

“I’m going to reflect on the recurring feeling I have of impending doom,” Walensky said in an emotional plea at a White House briefing Monday. “We have so much to look forward to, so much promise and potential of where we are, and so much reason for hope. But right now, I’m scared.”