Home » Politics » Biden meets with Pope Francis at the Vatican to talk climate, not abortion 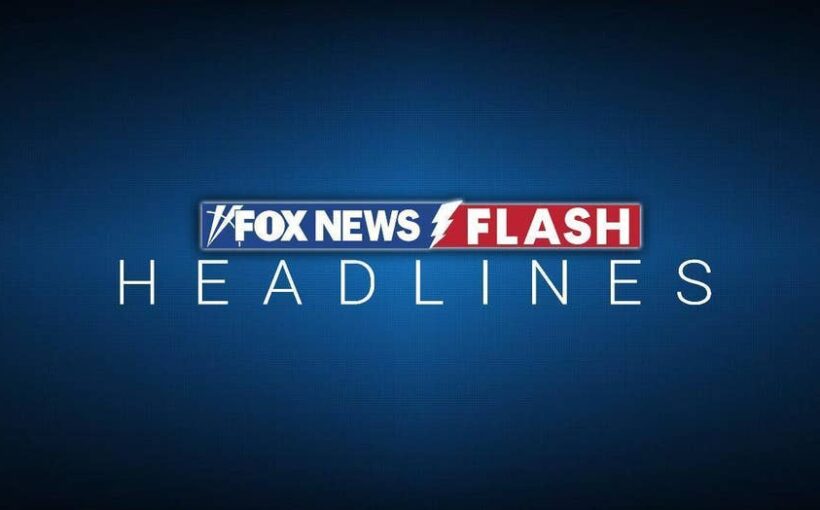 President Biden met with Pope Francis one-on-one for around 90 minutes Friday at the Vatican Friday, a key part of his trip to Italy for the G20, to discuss climate change, COVID-19 and caring for the poor amid Catholic scrutiny of the president’s pro-abortion rights policies.

BIDEN TO MEET POPE FRANCIS AMID SCRUTINY OF PRO-ABORTION POLICIES

An expanded meeting with Biden, Francis cardinals and White House aides began shortly after the one-on-one meeting, according to reporters traveling with the president.

“It’s good to be back,” Biden, traveling with first lady Jill Biden, said as he arrived Friday. 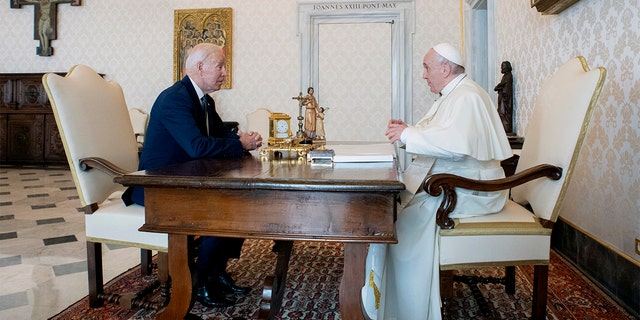 The president has met Pope Francis several times before their meeting Friday – including in September 2015, when the pope attended the World Meeting of Families in Philadelphia and at the Vatican in 2016, when then-Vice President Biden participated in a regenerative medicine summit.

Biden has been scrutinized for his support of abortion policies. Over the summer, the U.S. Conference of Catholic Bishops (USCCB) voted overwhelmingly to draft a formal document on the meaning of the Eucharist after a contentious debate on whether Biden and other politicians supportive of abortion policies are worthy of receiving Communion. The vote tally was 168 bishops in favor, 55 opposed and six bishops abstaining.

Biden, who attends Mass regularly, says he personally opposes abortion but doesn’t think he should impose that position on Americans who feel otherwise. He’s taken several executive actions during his presidency that were hailed by pro-choice advocates. 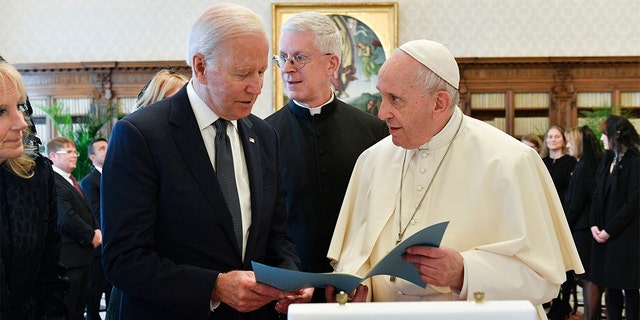 White House press secretary Jen Psaki this week said the two would discuss a range of issues on which they agree during their upcoming visit, and that abortion would not be one of them.

“There’s a great deal of agreement and overlap with the president and Pope Francis on a range of issues – poverty, combating the climate crisis, ending the COVID-19 pandemic – these are all hugely important, impactful issues that will be the centerpiece of what their discussion is when they meet,” Psaki said, explaining that Biden, who is pro-choice, does not have the same view on abortion as the pope.

“We expect a warm and constructive dialogue,” Psaki told reporters. “You are familiar with where the president stands. He’s somebody who stands up for and believes that a woman’s right to choose is important. The pope has spoken differently.”

At least two-thirds of the U.S. bishops would have to vote to adopt the new language at their next gathering slated for November. The decision on whether Biden should be allowed to receive Communion would still be left up to individual bishops, as is standard for all churchgoers, but a new document would inform those decisions.

Any document that the bishops adopt when they convene in Baltimore next month is unlikely to mention Biden or any other politician by name.

Just days after the bishops’ vote, the Holy Trinity Catholic Church in Washington, D.C., where the Bidens attend Mass when he is in the nation’s capital, said the church “will not deny the Eucharist to persons presenting themselves to receive it.”

“As Pope Francis recently reaffirmed, communion should be viewed ‘not as a prize for the perfect, but as a powerful medicine and nourishment for the weak,'” the church quoted the pope as saying. “None of us, whether we stand in the pews or behind the altar, is worthy to receive it. The great gift of the Holy Eucharist is too sacred to be made a political issue.”

The president and first lady are expected to spend two hours at the Vatican Friday. Following their meeting with Pope Francis, the president is set to participate in a bilateral program with Italian President Sergio Mattarella and Italian Prime Minister Mario Draghi.

Biden is then expected to meet with French President Emanuel Macron on Friday, before participating in the G20 Leaders’ Summit.