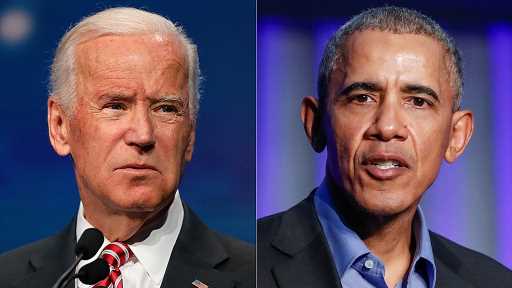 Former President Donald Trump sounds off on the migrant crisis unfolding at the southern border on ‘The Faulkner Focus.’

Psaki was asked by a reporter whether Obama had visited the White House and how often the two speak, to which she responded that Obama and Biden have a relationship that is not defined as president and vice president – instead, they are “friends.”

“They consult and talk about a range of issues and I would expect that continues through the course of President Biden’s presidency,” Psaki said. “That can be done over the phone it turns out, and I think if President Obama had been here, you would all know.”

Psaki declined to give an exact number of times that the powerful pair had spoken, but said they “keep in regular touch” and their respective teams also were in regular touch “about a range of issues.”

Psaki added that given Obama’s work on the Affordable Care Act, which Biden has committed to strengthening and expanding, that is one issue they will talk about.

She pointed questions as to what else Obama would specifically be involved in to his team.

Biden has tapped a number of individuals who previously served in the Obama administration to join his team, including chief of staff Ron Klain, National Security Advisor Jake Sullivan, U.S. Treasury Secretary Janet Yellen and Secretary of State Antony Blinken.

Despite the longstanding friendship, Obama drew interest from the media after he waited until late in the campaign cycle to formally endorse Biden

Meanwhile, Biden drew criticism throughout the campaign from Democratic contenders who accused him of running on Obama’s legacy.

During one 2019 debate, for example, Julián Castro, who served as Obama’s housing secretary, said Biden wanted to take credit for the Obama administration’s victories – but did not want to answer for any potential shortcomings.

Biden responded at the time that he stood with Obama over the eight years of his term.