Home » Biden Tried to Keep It Boring. This Week Intervened. 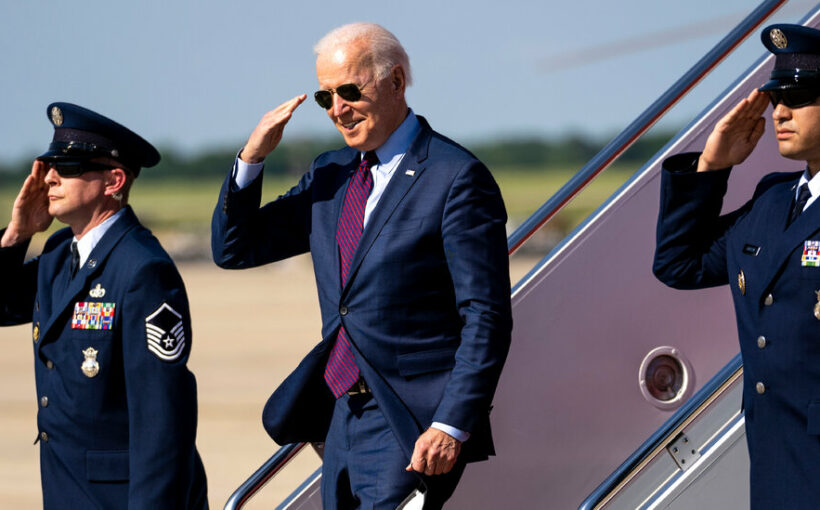 Hi. Welcome to On Politics, your wrap-up of the week in national politics. I’m Lisa Lerer, your host.

For the new president, the first 100 days were needles, checks and normalcy.

During the early months of his nascent administration, President Biden largely pursued his own agenda.

He got a $1.9 trillion stimulus plan passed, supercharged the distribution of vaccines and rolled out policies on infrastructure, child care, education, climate change and other Democratic priorities. The media gleefully reported on the return to norms in Washington. (Weekends! Press briefings! Grammatically correct tweets!) And Mr. Biden was allowed to be, well, boring.

The ability to keep a lower profile was a striking transformation for a politician who once described himself as a “gaffe machine.” In fact, being boring became a kind of Biden superpower, as the new president’s moderate tone and steady style helped deflect criticism of the roughly $6 trillion in new federal spending his administration proposed.

It wasn’t that Mr. Biden no longer made news. But by swapping personality for policy, his team projected the image of a drama-free White House, focused on restoring calm after the chaos of the Trump administration.

Well, some chaos came back this week.

A series of crises has shown how quickly a presidential agenda can be overtaken and why, exactly, the first 100 days are often called the honeymoon period.

Divisive issues are rapidly rising to the front of the national conversation, presenting early tests for the new White House. For some in the administration, they’ve come as an unwelcome distraction that threatens to knock the president off his carefully curated message.

This isn’t a surprising turn: It is the unexpected that often defines a presidency. Bill Clinton entered office with little foreign policy experience but was quickly forced into messy conflicts in Haiti, Somalia and Rwanda. Terrorist attacks transformed George W. Bush’s first term. In his second, a 90 percent approval rating that was built on his leadership after the Sept. 11 attacks was marred by his response to Hurricane Katrina, which became a modern metaphor for a mishandled crisis. Barack Obama took office in the midst of economic crisis and then faced the Deepwater Horizon oil spill. And Donald J. Trump’s response to the coronavirus pandemic will be a central part of his legacy.

“I always say, you don’t judge presidents by the agenda they set for themselves but by how they respond to the agenda that’s set for them,” said James Zogby, the founder of the Arab American Institute. “The agenda has now been set for President Biden.”

But this White House, in particular, has shown a resistance to letting external events knock its plans off course. Mr. Biden’s efforts to avoid those kinds of sprawling crises was clear in his response to the explosion of violence in Israel and Gaza this past week. His administration expressed no appetite for negotiating a peace agreement, instead pursuing what one former ambassador to Israel called “conflict management, rather than conflict resolution.”

While Mr. Biden largely stuck to the decades-old Democratic playbook of expressing solidarity with Israel, some in his party broke ranks to openly criticize his administration for what they viewed as a willingness to turn a blind eye to human rights abuses against Palestinians.

During a news conference on Friday, a day after Israel and Hamas agreed to a cease-fire, Mr. Biden said that Democrats still fully supported Israel, a position that is unlikely to satisfy many in his party’s left flank.

“There is no shift in my commitment to the security of Israel,” he said. “Period. No shift, not at all.”

Past cease-fires between Israel and Hamas have proved fragile, making it unlikely that Mr. Biden can avoid the challenging issue for long.

The Supreme Court thrust another historically divisive issue onto the administration’s agenda this week, when the justices decided to take up a Mississippi abortion ban case that challenges Roe v. Wade. While his administration has rolled back Trump-era policies on reproductive rights, Mr. Biden himself has remained silent on the issue, even as state legislators passed an unprecedented 549 abortion restrictions over the past four months, according to the Guttmacher Institute, a research group that supports abortion rights.

Abortion rights supporters have begun pushing Mr. Biden to speak out more forcefully, and their calls are likely to escalate as the court’s hearing draws closer.

Other challenges loom. While the record numbers of unaccompanied children crossing the southwestern border declined modestly last month, immigration remains a problem so intractable that it divides even Mr. Biden’s allies. Fears of inflation threaten a fragile economy. And Democrats remain deeply divided over Mr. Biden’s tax plans, which could complicate the passage of his infrastructure proposals.

In general, there’s some evidence that huge failures of government — the kinds that cause crises for presidents — are happening more frequently.

Paul C. Light, a professor of public administration at New York University, has spent years tracking how presidents have handled “breakdowns” in the machinery of the federal government. Decades of government neglect, including the failure to upgrade technology and to modernize the Civil Service, have drastically increased the number of breakdowns in recent years. Mr. Biden, he argues, is unlikely to escape them for long.

Biden supporters say they’re not worried, pointing to the popularity of his coronavirus relief bill and his handling of the pandemic.

“He has hit the ground running,” said former Gov. Terry McAuliffe of Virginia, who is the likely Democratic nominee in the race for his old office this year. “If he continues on the path and doing the things he’s doing, this honeymoon is going to go into the fourth wedding anniversary.”

And Mr. Biden’s administration says it came into office prepared to face a series of crises: a pandemic, an unstable economy, a racial reckoning and the second impeachment trial of the president’s predecessor.

“We know how to multitask there,” Vice President Kamala Harris told NPR days before taking the oath of office. “We have to multitask, which means, as with anyone, we have a lot of priorities and we need to see them through.”

But these new issues divide Americans far more deeply than expanding vaccinations and handing out checks. Mr. Biden and his team have successfully avoided wading into controversy on many divisive issues with message discipline and a bit of luck. Whether they can maintain that balance as external events intrude will offer a far better measure of his presidency than any 100-day honeymoon.

Drop us a line!

We want to hear from our readers. Have a question? We’ll try to answer it. Have a comment? We’re all ears. Email us at [email protected] or message me on Twitter at @llerer.

By the numbers: 39 percent

… That’s the percentage of people in rural counties who had been vaccinated as of April 10, compared with more than 46 percent in urban counties, according to a new report from the Centers for Disease Control and Prevention.

“You have a staffer who fully crawled on the carpet behind you, and it is the greatest thing I’ve ever seen.”

Thanks for reading. On Politics is your guide to the political news cycle, delivering clarity from the chaos.

On Politics is also available as a newsletter. Sign up here to get it delivered to your inbox.

Is there anything you think we’re missing? Anything you want to see more of? We’d love to hear from you. Email us at [email protected].