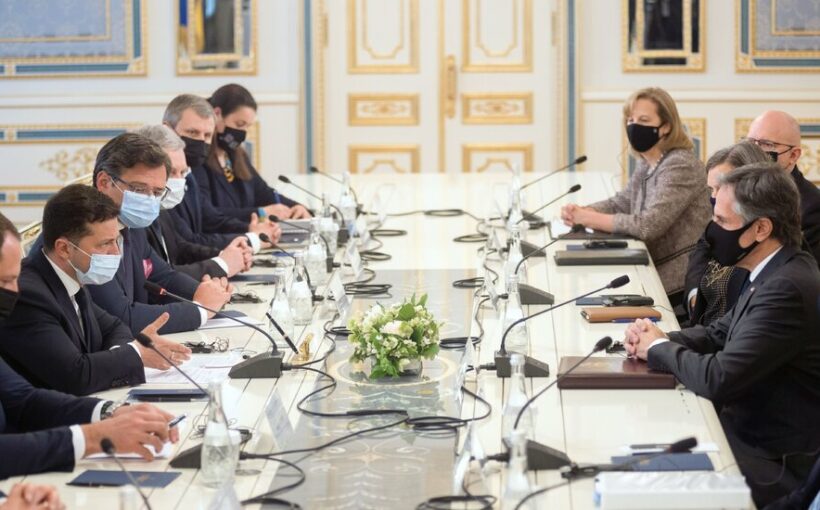 KYIV, Ukraine — Secretary of State Antony J. Blinken told Ukraine’s president on Thursday that the United States strongly backed his country’s sovereignty against Russia’s military aggression but also warned that the embattled country was under threat from “internal forces,” including powerful oligarchs who thrive on corruption.

Mr. Blinken also said that, despite Russia’s recently announced plans to withdraw many of the 100,000 troops it had built up along the border with Ukraine in an alarming show of force this spring, a clear military threat remained.

“Russia has pulled back some forces, but significant forces remain on Ukraine’s border,” Mr. Blinken noted. “And so Russia has the capacity on fairly short notice to take aggressive actions if it so chooses.” Mr. Blinken added that the United States was “watching this very, very carefully.”

Mr. Blinken spoke at a joint news conference with the Ukrainian president, Volodymyr Zelensky, who effusively thanked the first senior Biden official to visit Kyiv since the departure of President Donald J. Trump from office. The former president ensnared Mr. Zelensky in a global scandal that the Ukrainian leader clearly hopes to forget.

Asked whether efforts in 2019 by Mr. Trump’s personal lawyer, Rudolph Giuliani, had “set back” efforts to drive corruption out of Ukraine’s political system, Mr. Zelensky boasted about his reform record, then indicated that he hopes the matter is finished.

“Let’s not talk about the past,” he said. “Let’s let bygones be bygones, and let’s discuss the future.” 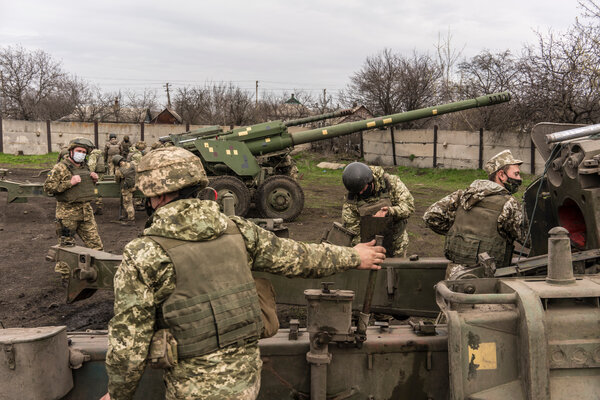 That may be difficult, given an active F.B.I. investigation into Mr. Giuliani that culminated last week in a raid on his apartment and office. Federal agents were reportedly seeking evidence of his role in the May 2019 removal of the American ambassador to Ukraine, allegedly at the behest of Mr. Giuliani’s Ukrainian associates.

Mr. Blinken for his part maneuvered around a question featuring Mr. Giuliani, but reminded Mr. Zelensky — whose reform record has drawn mixed reviews — that “effectively combating corruption is one of the most important issues to the Ukrainian people, and is crucial to improving their lives.”

Even as Ukraine struggles to flush corruption from its political system, partly fueled by a Kremlin seeking to destabilize its pro-Washington government, the country is fending off a Moscow-backed, pro-Russian separatist insurgency in the country’s east. Fighting in the region has claimed more than 13,000 lives, according to the United Nations.

To sustain that conflict, and to weather any new offensive by Russia, Ukrainian officials are eager for more military assistance and potential arms sales from Washington, which currently sends Ukraine more than $400 million in annual military aid. Mr. Blinken said that the Biden administration was “working very actively” on the subject but offered no further details.

But Mr. Blinken underscored his concern about Ukraine’s military plight with a morning visit to an outdoor memorial for soldiers who have died in the conflict in the east. The monument, known as the Wall of National Remembrance, features hundreds of photographs of the fallen that run along an outer wall of St. Michael’s, a 12th-century monastery and church.

In driving rain, Mr. Blinken, accompanied by the senior figure in Ukraine’s Orthodox Church and the country’s foreign minister, knelt to lay flowers at the foot of the wall.

Later, Mr. Blinken told Mr. Zelensky that the pictures of the fallen had touched him personally.

“We were able to pay tribute to those who lost their lives defending Ukraine’s democracy,” he said. “And it’s very, very moving to be at the wall.”

“You see in those pictures, each one of them — and you think of the mothers and fathers, the sisters and brothers, the children who have lost their loved ones because they were defending Ukraine, and it’s very, very powerful,” he added.

In September 2019, a C.I.A. whistle blower revealed that Mr. Trump, in a June 2019 phone call with Mr. Zelensky, pressured him to announce an investigation into Mr. Biden, then a Democratic contender for president, and Mr. Biden’s son Hunter, who worked for a Ukrainian energy company. Mr. Trump withheld U.S. military aid to Ukraine as he pressed his request. The episode led to Mr. Trump’s first impeachment and a painfully awkward experience for Mr. Zelensky.

During the joint appearance with Mr. Blinken, the Ukrainian leader said he hoped that Mr. Biden himself could visit Ukraine soon. Mr. Blinken cited limits on travel because of the coronavirus but said that the American president “will welcome the opportunity at the right time.”

Mr. Blinken was joined by a longtime ally of the Ukrainians, the State Department’s newly confirmed under secretary for political affairs, Victoria Nuland. A career Foreign Service officer and high-ranking State Department official in the Obama administration, Ms. Nuland left government in early 2017 but was tapped this year to become the department’s No. 3 official.

Ms. Nuland is well remembered in Kyiv — and reviled at the Kremlin — for passing out food in 2013 to protesters in the Ukrainian capital’s Independence Square, known as the Maidan, in the prelude to the overthrow of Viktor F. Yanukovych, the Russian-backed president of Ukraine at the time.

Her presence was clearly appreciated. At the beginning of a morning meeting with Mr. Blinken, the foreign minister, Dmytro Kubela, congratulated Ms. Nuland on her appointment and noted to laughter that one of the few major events on the Maidan that he had missed “was your cookies.”