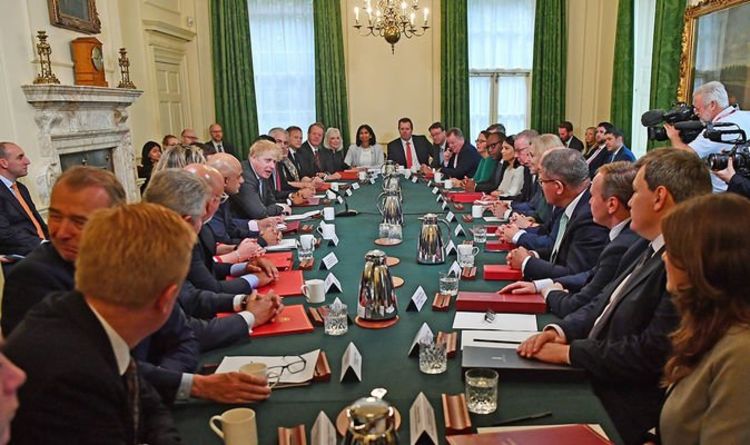 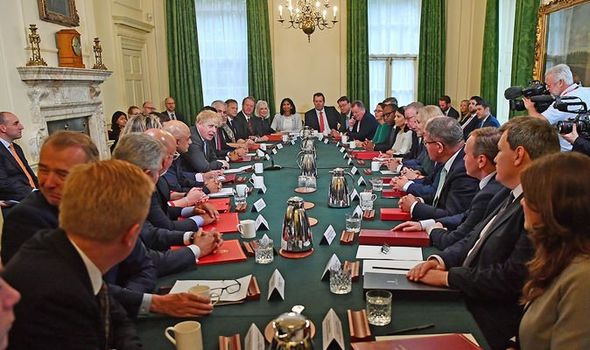 He told them: “This is the moment when we spit out the orange peel, adjust our gum shields and get back on the pitch.”

Mr Johnson appeared to be in a buoyant mood, making jokes and firing metaphors as he gave an opening speech to the ministers crowded around the No 10 table, none of who appeared to be wearing masks.

With former Education Secretary Gavin Williamson among those sacked, the Prime Minister told the surviving Cabinet members they are all there on “merit”. But he added it was now time to deliver for the public. He told his team: “I’m just thinking about delivery. I’ve seen a few delivery rooms, probably seen as many delivery rooms as anybody in this… with the possible exception of Jacob (Rees-Mogg, the Commons Leader).

“I know that delivery normally involves a superhuman effort by at least one person in the room. But there are plenty of other people in that room who are absolutely indispensable to that successful outcome.” His wife Carrie is pregnant with their second child but he refuses to say how many children he has. It is thought to be at least six. Mr Rees-Mogg has six.

Mr Johnson continued: “To mix my metaphors, this is, if you like, the half-time pep talk.” After making the orange peel comment he added: “We get out on to the pitch in the knowledge that we’re going to have to do it together and we’re going to have to do it as a team.” Earlier this week, he sacked three of his senior ministers, including Mr Williamson and Justice Secretary Robert Buckland.

There were promotions for Liz Truss as the new Foreign Secretary, Nadhim Zahawi as the Education Secretary and Nadine Dorries as the Culture Secretary. Michael Gove replaced Robert Jenrick as the Communities Secretary.

Dominic Raab was demoted from his Foreign Secretary post and is now Justice Secretary and Deputy Prime Minister.