Home » Politics » Boris Johnson sparks Commons eruption as he slams Starmer for ‘running the country down!’ 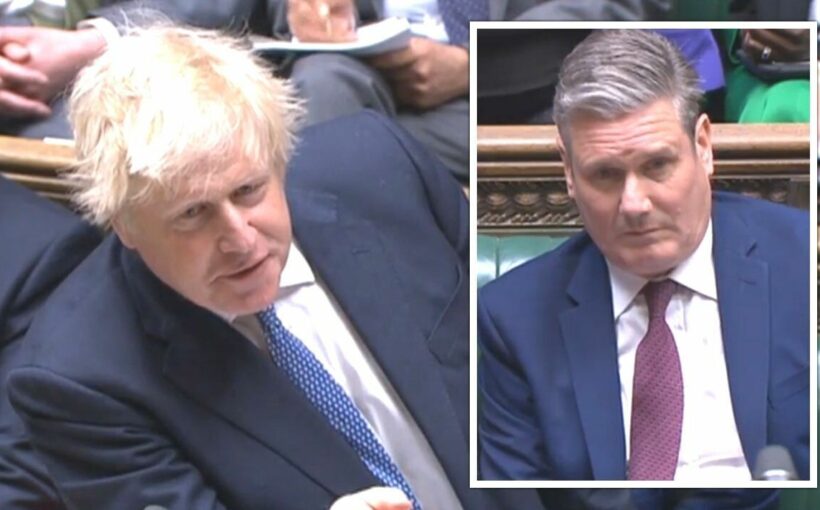 PMQs: Johnson accuses Starmer of 'running this country down'

The Prime Minister lambasted Sir Keir for his repeated assertions that the UK had the “highest COVID death rate in Europe”. He said Sir Keir was “proved completely wrong” but never apologised for the remarks following the UK’s rapid growth following the lifting of restrictions ahead of its European fellows. He added that the Government “care about the working people of this country” while Labour do not “care about getting people back into jobs”.

Mr Johnson said: “Mr Speaker, he loves running this country down. How many times did he come to this place and say the UK had the highest COVID death rate in Europe? How many times?

“[Labour] don’t care about getting people back into jobs. We care about the working people of this country making sure we have a high wage, high skilled, high employment economy, and that’s what we’re delivering!”

The Prime Minister was responding to accusations made by Sir Keir that the Government was guilty of “complacency”.

Sir Keir said the Government had inflicted “the twin-head hydra of the highest inflation and the lowest growth”.

He told the House of Commons: “Mr Speaker it was not just the Chancellor back in September, the Prime Minister called fears about inflation unfounded.

“And it wasn’t just on inflation that [the Government] got it badly wrong.

“In the same speech that the Chancellor boasted about growth as the Prime Minister does today, talking about how we were going to do better than all our other competitors, it was obvious that he was being complacent.

“And lo and behold, Britain is set to have the lowest growth of any major country except Russia.

“Despite our brilliant businesses and all we have to offer, why has his Government inflicted on Britain the twin-head hydra of the highest inflation and the lowest growth?”

On Wednesday, environment secretary George Eustice said the Government faced a “very difficult path” to alleviate the cost of living crisis without further driving up a high inflation rate.

Rishi Sunak is expected to unveil a multibillion-pound plan this week to address the squeeze in living standards caused by such inflation, with Mr Eustice claiming “we may hear more this week”.

But, he said: “We are treading a very difficult path here because if we just borrow lots more money and throw it at the situation we could compound inflation, we could make the situation worse and see prices rise further.

“So we have got to try to dampen that inflation and that means showing some restraint but, equally, helping people, particularly those on the lowest incomes, who will struggle with some of these price rises.”