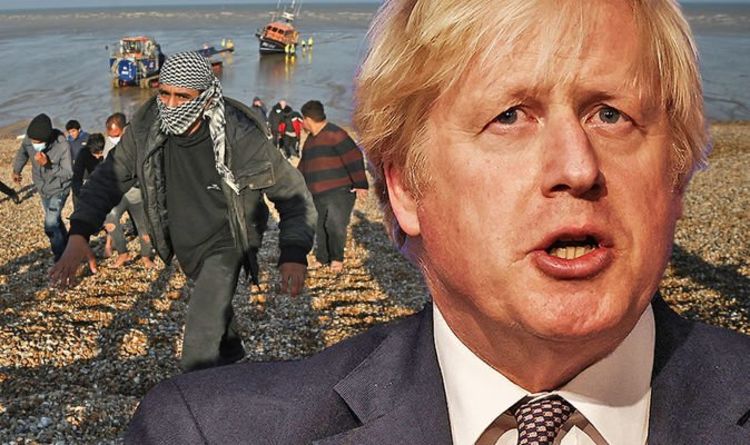 Channel ‘one area where we lost control’ says Kim Darroch

Close to 30,000 migrants have made the dangerous crossing from France to the UK over the past 12 months. The figure is well over three times the amount that crossed in the whole of 2020.

The record number of crossings has also seen what is believed to be the record single-day death toll, with 27 migrants drowning while attempting to make the journey in a dinghy in late November.

The group included seven women – one of whom was pregnant – and three children.

Leading conservative commentators have warned the crisis will continue to wreak havoc unless the Government takes series action to stop it.

They added that accusing France of not doing enough only distracts from what ministers here should be doing.

Alp Mehmet, Migration Watch UK Chairman, told Express.co.uk: “While the blatantly political, playground posturing of the French President might divert attention from our own ministers’ piffling performance, ultimately, it is a problem they and not others must solve.

“So far, they have provided little evidence of being up to the task.”

He added that the UK Government’s “dithering” on the matter was similar to its “vacillations over a Christmas lockdown – yes, no, maybe, not yet…”.

If it doesn’t change its tune, Mr Mehmet suggested “many more” than 30,000 migrants can be expected to cross the Channel to Britain next year.

The Bow Group Chairman Ben Harris-Quinney added: “It would be foolish to assume the problem lies only on the French side.”

He told Express.co.uk that France is certainly guilty of failing to act appropriately, but that there are also plenty of moves the British Government could make itself, without having to rely on President Macron.

Firstly, he suggests: “The Government needs to pass new legislation to ensure that anyone entering the UK without a VISA will be automatically deported and unable to claim asylum.

“They need to fund the Border Force and use military resources to shut down illegal immigration.

“Most importantly, they need to slash the 750,000 legal immigration numbers so that we enter a negative immigration period where substantially more people are leaving the UK than entering.”

Mr Harris-Quinney suggested the Government may be attempting to distract attention from itself onto the actions of Mr Macron because it sees no problem with heightened immigration numbers.

But he added that such a sentiment is not shared by its supporters and could lead to disastrous consequences.

He said: “While the Conservative Party love mass immigration, their members and voters, and the vast majority of the British public do not.

“It is up to us to hold their feet to the fire and force an end to mass immigration, legal and illegal, or within a few decades Britain will be unrecognisable and dangerously divided.”

A row ensued between Mr Johnson and Mr Macron in November when the UK was disinvited from a meeting on the Channel crisis because the Prime Minister posted a letter outlining his proposals on social media.

The crisis continues, but no such meeting has yet taken place since.