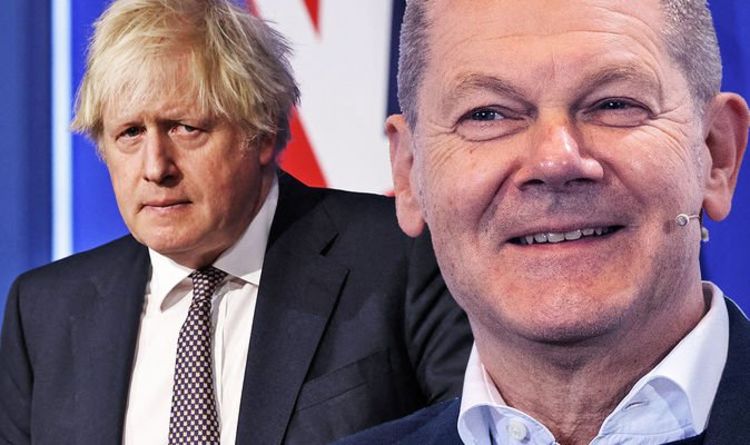 Mr Scholz is taking over from Angela Merkel, who is stepping down as Chancellor after 16 years at the helm. But Jayne Adye, director of pro-Brexit campaign group Get Britain Out, said the Prime Minister could expect no favours from the SPD leader or his administration – and needed to take decisive action sooner rather than later on one key issue.

She told Express.co.uk: “It is clear this new coalition has no intention of accommodating the United Kingdom renegotiating the Northern Ireland Protocol.

“Their coalition document even goes as far as specifically stating the Protocol must remain in force.

“So, instead of standing around with our hands behind our backs, the UK Government must take action to implement Article 16 while the new German Government is still in its fledgling days.”

However, Ms Adye warned there were storm clouds gathering.

She explained: “The fragility of this so-called ‘traffic-light coalition’ cannot be underestimated.

“There are three parties with wildly different beliefs – so much so they have required a 177-page coalition document to bind things together.

“You can be certain such divergent views can only mean very little will actually end up being done, with the path of least resistance taken every time. This is no way to run a country!”

The coalition partners had agreed on their so-called Green Agenda and on “criticising the UK” but there was little common ground elsewhere, Ms Adye pointed out.

She said: “They still have no policy towards Government borrowing; the Nord Stream 2 pipeline; or any commitment to meeting NATO targets for defence spending.

“These are not issues which can be swept under the rug and ignored.

She stressed: “Such indecision in the largest economy in Europe, not only leaves the EU vulnerable, but it has the potential to harm the UK economy as well.”

At a joint press conference with coalition partners on Wednesday, Mr Scholz underscored his belief in federalism, prompting David Jones MP, deputy chairman of the European Research Group (ERG) to suggest it amounted to a commitment to a “full-blown superstate”.

Ms Adye commented: “With a clear commitment to further EU integration, the UK must also look closely at the policies advocated by Chancellor Scholz and his Government because you can be certain any action which gives more power to the EU Commission will not be in the best interests of the UK.

“No doubt their refusal so far to agree any commitment on defence spending will contribute directly to an increased involvement in developing an official EU Army.

“This is a fact which makes the recent merger of a UK and German army unit even more concerning.”

Ms Adye said the new Government had promised a paradigm shift when it comes to immigration in Germany, proposing a “modern country of immigration”.

In reference to recent events in the English Channel, not least the deaths of 27 migrants attempting to cross in a flimsy dinghy on Wednesday, Ms Adye added: “Perhaps they should have a word with President Macron of France, and the rest of the EU and ask them to step up and take responsibility for the migrants crossing their borders.

“There is no reason why individuals should be put at risk, paying criminals to arrange illegal crossings of the English Channel, leaving safe countries in Europe like France, to lose their lives in flimsy dinghies at sea.”