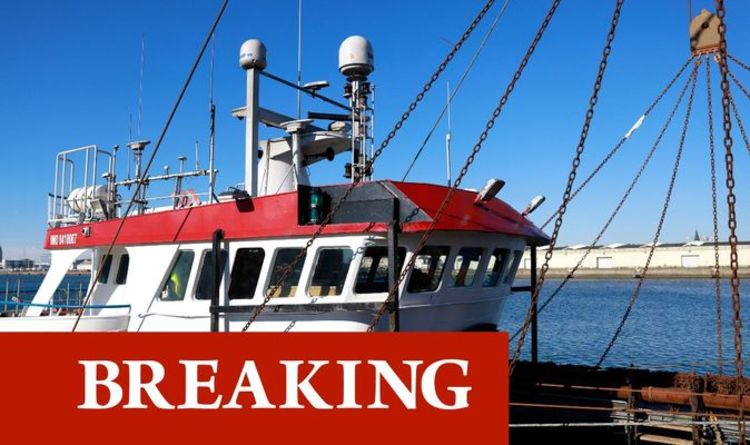 Meanwhlle a UK-based industry leader has said France’s reaction was “extraordinarily over the top”. Cyrille Fournier, who represents the prosecutor’s office for the French port of Le Havre where the boat was seized, said in a statement that the captain of the Cornelis Gert Jan boat had been asked to appear in court on August 11, 2022.

He added that the trawler did not have the required licences to operate in those parts of French territorial waters.

This has been denied by Scottish company Macduff Shellfish, which used the boat and has said it did have the appropriate licences.

On Thursday, Britain denounced France’s seizure of the British boat and warned Paris against further retaliation, in the rapidly deteriorating row over the post-Brexit fishing rights.

The Cornelis Gert Jan, a scallop dredger, was escorted to the northern port of Le Havre after its crew failed to prove it was allowed to fish in French territorial waters.

Jim Portus, chairman of the Scallops Industry Consultation Group, said French authorities are being “extraordinarily over the top”, as the row over the detained British trawler continues.

He told Sky New: “France was part of the negotiations for the TCA (Trade and Co-operation Agreement), they knew what the rules were.

“The rules can’t be changed for France when they are applied to all the nations of the EU.

“So I think that France are being extraordinarily over the top in their treatment of British fishing vessels in this case and definitely they need to wind things down.”

Mr Portus added that if certain terms of the TCA need to be renegotiated, it is not a job for “hot-heated individuals”.

The owner of the Cornelis, Macduff Shellfish, said the vessel had been fishing legally in French waters and called on the British Government to protect the rights of British fishermen.

Andrew Brown, director of sustainability and public affairs at Macduff, said: “It appears our vessel has been caught up in the ongoing dispute between the UK and France on the implementation of the Brexit fishing agreement.

“The Cornelis does have catch aboard.

“This may be confiscated by the French authorities unless a speedy resolution is achieved.

“We are looking to the UK Government to defend the rights of the UK fishing fleet and ensure that the fishing rights provided under the Brexit fishing agreement are fully respected by the EU.”

Meanwhile, speaking to the BBC’s Good Morning Scotland programme on Friday, Environement Secretary George Eustice said the scallop trawler was originally on a list of approved vessels before apparently being taken off – but was nevertheless entitled to fish in the waters.

He said: “We’re trying to get to the bottom of what happened.

“It is true that it was on the list originally and it had a licence.

“We understand that what happened is it may have made some changes to the engine on the vessel, and that meant that the licence had to be renewed.

“We’re trying to get to the bottom, working with Marine Scotland and the MMO and the owners of the vessel, to understand why it dropped off the list.

“But this is a minor administrative thing. I think it is entitled to fish in those waters.”

Mr Eustice added that France had decided to “politicise” the process of checking vessels this week.