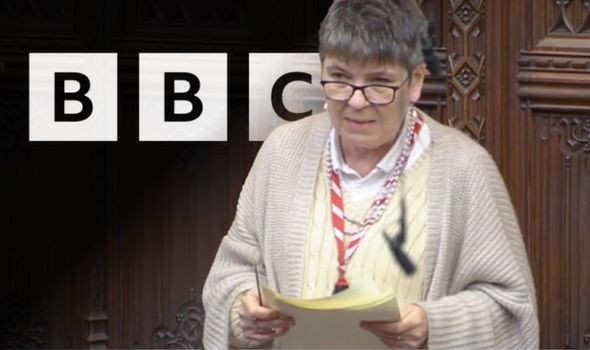 Baroness Fox told peers “groupthink” at the national broadcaster meant that there was a lack of diversity in political opinion.

She said the corporation’s output and reputation for impartiality was being badly impacted by the failure to embrace alternative views.

The crossbench peer told the Lords: “I even know people at the BBC who voted to leave the European Union, but they couldn’t come out and they remain secret Brexiteers to this day.

“Not everyone agrees, but everyone knows the narrative you’re expected to follow.

“The embrace of such orthodoxies is rarely spotted as a threat to the impartiality of BBC output but it is a new and very present danger.”

She made her remarks as part of a debate on the “BBC’s value to the UK and a wider global audience”.

Baroness Fox, who was appointed to the Chamber by Boris Johnson as part of a bid to increase the number of pro-Brexit voices in the Lords, said she was speaking as a ‘critical friend” of the BBC.

She was not alone in her criticism, with other Brexit-backing peers echoing her argument and calling for the broadcaster to do more to encourage diversity of opinion.

Tory former Cabinet minister Lord Lilley said: “Despite its tedious obsession with gender and racial diversity, the BBC suffers from a lack of diversity of opinion and an overwhelming liberal metropolitan bias that manifests itself less in what is said than what is not said.

“The voice is not heard, the questions not asked, the issues not addressed.”

The three areas in which this bias and censorship are most “blatant”, Lord Lilley said, are the “EU/Brexit, energy/climate change and immigration/skills”.